I had no idea that the UK is legally prepared to unilaterally withdraw recognition of a diplomatic premise. Not that I think they will actually do it, at least, not over the minor melodrama that is Julian Assange's Excellent Ecuadorian Embassy Adventure, but I am pleased that they at least raised the possibility.

The BBC reported today on the UK 'threat' to arrest Wikileaks founder:

The UK Foreign Office says it can lift the embassy's diplomatic status to fulfill a "legal obligation" to extradite the 41-year-old.

The law the UK has informed Ecuador it could use in the case is the Diplomatic and Consular Premises Act 1987 [read it here].

It allows the UK to revoke the diplomatic status of an embassy on UK soil, which in this case would potentially allow police to enter the building to arrest Mr Assange for breaching the terms of his bail.

The act was introduced after PC Yvonne Fletcher was shot outside the Libyan Embassy in London in 1984.

You can see a contemporary British TV news report on the murder of 25-year-old Police Constable Fletcher here. All these years later, delivering her killer to justice is still a political football between the UK and the new, improved, Libya.

The idea of a host country revoking the diplomatic recognition of a premise that is being used for un-diplomatic activity appeals to me. Has the U.S. made that kind of legal provision? If not, we should.

The New York Times has some details on Assange's condition inside the Embassy of Ecuador:

The WikiLeaks founder sleeps on an air mattress in a small office that has been converted to a bedroom, according to accounts of those who have visited him. He has access to a computer and continues to oversee WikiLeaks, his lieutenants have said. Reporters outside the building have seen food being delivered from nearby restaurants.

His presence is a challenge for employees of the embassy. One British government official, citing a conversation with a member of the embassy staff, said that the situation was surreal.

A diplomat familiar with Mr. Assange’s situation said that he spent his time in a back room, which gets no direct sunlight. Several weeks ago he had a bad cold and appeared depressed, the source said.

“He can’t get outside to see the sun,” his mother, Christine Assange, said in a recent interview conducted in Quito for BBC Mundo, a BBC Web site. “I’m worried about his health, as I would be for anybody who is having to stay indoors and not get exercise and have sunlight.”

She said some of Mr. Assange’s friends have encouraged him to put on music and dance as a way of getting physical activity and that they had also brought sunlamps.” 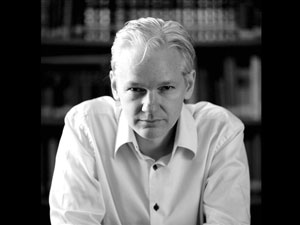 Maybe the sunlamps will help Assange with his vitamin D deficiency and seasonal affective disorder. But I don't think anything can help him with that major case of melanin impoverishment he's got going on. Assange is undoubtedly the lightest-skinned human being ever to come out of Australia. If he gets any paler he might turn translucent and slip right past the British police on watch outside the embassy.

Give him some color with this before he gets away.

Whoa, he really does look like a younger brother of theirs!