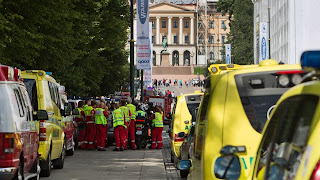 Looking on the sunny side of this incident, at least it shows that our vehicle inspection procedures work, and that's good to know.

Whenever this sort of human error happens, which is often, I marvel again over the fact that there are people who think the U.S. government faked the moon landing, covered up the real truth about the Kennedy assassination, and collaborated with extraterrestrials to invent stealth technology.

ABC News has the following report, Sorry About the Fake Bomb

U.S. officials apologized today for mistakenly leaving a fake bomb attached to an embassy vehicle in Oslo and causing a bomb scare that led to the evacuation of the U.S. embassy, Norway's royal palace and part of downtown Oslo.

The device had been placed beneath an embassy vehicle as part of a security drill and then mistakenly left there. It was spotted by security guards at the embassy's front entrance when someone tried to drive the vehicle onto embassy grounds just after 11 a.m. local time, triggering the evacuation of the embassy and the palace, the cancellation of an international children's soccer game nearby, and an interruption of nearby subway train traffic.

Deputy State Dept. spokesperson Patrick Ventrell confirmed that the device had been used in a previous drill and then forgotten.

"This morning at our U.S. Embassy in Oslo, Norway," said Ventrell, "Embassy security staff identified a suspicious device in an Embassy-owned vehicle and took appropriate precautions. Upon investigation, the device was determined to be a non-threatening training device previously used in an exercise."

"We regret any disruption caused by this incident not only for visitors to the Embassy and others, but neighbors, and we take any potential threat seriously and respond immediately."

In Oslo, the U.S. ambassador apologized to police via a phone call, according to Norwegian media. An embassy spokeswoman also issued a public apology. "The Embassy regrets the uproar this caused," said Marit Andersen. "But to ensure the safety of embassy employees, visitors and our neighbors, it is necessary that we take every security threat seriously and act accordingly. The Embassy would like to express gratitude for the extremely fast and professional response from Norwegian emergency services."

The Oslo bomb squad, emergency services and other agencies responded to the bomb alert. The children's soccer game was cancelled so the field could be used to land helicopters. The Oslo squad removed the object and determined that it was a dummy bomb. The Oslo City Council, according to Norwegian media, is seeking compensation for the police response.

10. There is nothing you can do about white terrorists. (snip) But hundreds of billions of dollars must be spent on police and on the Department of Defense, and on TSA, which must virtually strip search 60 million people a year, to deal with other terrorists.

I just wish the word "terrorist" still meant someone who commits violence to advance a political cause. Today, everybody who kills anybody is called a "terrorist" even when they are really apolitical mass killers, spree killers, serial killers, etc. I think that rhetorical change occurred after the Patriot Act.

Title 22 of the U.S. Code, Section 2656f(d), defines terrorism as “premeditated, politically motivated violence perpetrated against noncombatant targets by subnational groups or clandestine agents, usually intended to influence an audience.” Timothy McVeigh intended to influence an audience; these guys who shoot up Sikh temples and movie theaters do not.

The FBI used to maintain (correctly and bravely, I think) that serial or mass murder committed for personal non-ideological motives was not terrorism. Not even when it was the UNABOMBER. See page 32 of this FBI report from 1999:

I liked it better when we made those distinctions.

Well, it's an election year summer, which means the Democrats would be all over something like this if the shoe were on the other foot. But if I know the Republicans, they won't hold a single hearing.

There are several reasons why they won't, all of them bad. It would repel Libertarian-Cato Institute socially liberal types, it would suppress the Log Cabin gay Republican turn-out, it would turn off some big bucks contributors, the press would get to call them 'Taliban Republicans' again, the voters supposedly don't like that old school-style politics (even though they really do), and their wives would be shunned at dinner parties.

Great analysis TSB! (I'm sure I will figure it out before the weekend is over.) gwb

But if RP was on the ballot he would probably say:"I don't think we need any hearings. Let's just wait until January when we can start shutting down all this nonsense and send those "mudwrasslers" back home."

TSB: What is it that makes these rural Virginia people think they don't need more government regulation? Don't they know how dangerous pumpkin carving is? And pumpkins can be scary too! gwb

This story has been big in the local news, but I can't figure out the reason for the government crack-down. Fauquier County is out beyond the exurbs, where regular people live, I thought.

Anyway, I'm proud to see that Virginians still don't take tyranny lying down. It's on our state seal:

TSB: I understand why the rich guys and the bankers never get charged or punished for their crimes but can someone explain to me why these guys never get arrested... even when they confess!

GWB: I hope he doesn't get to use the diminished capacity ("I was soooo drunk") loophole.

The Portland Archdiocese has hired him the best criminal defense atty in the state which is par for the course. All the other pedophiles are immediately thrown in the can but for some reason the police are afraid to arrest a priest. Maybe they are afraid of a lawsuit?

I've been trying to think of a way
Ecuador can pull off this Assange caper. The best I can come up with is to grant him citizenship and then name him ambassador to the UK!

Then he could volunteer to go to Sweden and face the charges. I'd like to see what Hillary would say to that. gwb

Ecuador could make him a citizen, but they couldn't force the British to accept him as a diplomat to the UK. They might try getting him accredited as a diplomat to some other country or the UN, and then defy the British to stop him from leaving the country to take up his new post. Probably wouldn't work, but it would raise the circus value of the whole thing a notch.