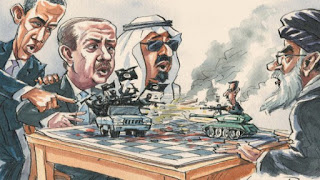 The Rand Corporation's - justly - renowned deep thinker on counterterrorism, Brian Jenkins, posted an article today that reads like a bucket of cold water thrown in the face of our national security establishment. Read it here: Any Review of Syria and Iraq Strategy Needs Realistic Reappraisal.

Note that the title juxtaposes the words "Syria and Iraq strategy" and "realistic," which signals that the author is not going to deliver the usual happy-talk about 'degrade and defeat' or 'train and assist' or whatever other buzz words are in fashion. Instead, he starts by listing some obvious realities:


He closes with this:


Although these stark conclusions hardly sound controversial, they are antithetical to American policy. The very idea of a military stalemate lasting years — or decades — defies America's sense of progress. Secular, democratic governance and religious tolerance are deeply held American values. The United States operates on the presumption that the sectarian and ethnic divisions can be bridged; that Iraq's national army can be rebuilt into an effective fighting force; that the Bashar Assad regime in Syria can be replaced by a more inclusive government; that the Sunnis can be won over and the jihadists can be isolated, contained and defeated; that peace and national unity can be restored, enabling the refugees to return; and that this can be achieved without the commitment of large numbers of combat forces or even with the commitment of American combat forces.

Unquestionably, these are noble aims, and diplomats are required to be optimists. Nonetheless, national objectives must be based upon realistic assessments of the situation. Here, the distance between presumed aspiration and reality seems great.


So you say we ought to consider reality as we pursue our national objectives in the partitioned and stalemated Iraq and Syria? You are right, Mr, Jenkins, that does not sound at all controversial.

But bear in mind that the Rand Corporation is the government-funded policy think tank of the Pentagon, so even that mild scolding is coming from the inside. Could it indicate a new willingness to stop stumbling along with our Neo-Wilsonian approach to the Middle East?

From Brian Jenkin's mouth to God's ears (you should forgive the Yiddishism).

Posted by TSB at 8:05 AM
Labels: Future of Iraq Project, Iraq, Syria

But TSB: We are still winning in Afghanistan with our new strategy aren't we?
http://www.charlotteobserver.com/news/nation-world/article37437879.html
Doctors Without Borders: 19 dead in Afghan clinic airstrike

We just wait til the hospital is full of casualties in Konduz and bomb the hell out of it! It's a lot more efficient than trying to kill them one at a time. I wonder if anyone will ask the US Army Chief who was crowing about that battle on Friday that this is proof the Afghan army is capable of fighting on their own... Is Doctor's Without Borders a terrorist org? gwb

TSB: It looks like bunker busters were the key to defeating ISIS, not stopping nuclear proliferation. (i never thought of that)
Russia Claims ISIS Now On The Ropes As Fighters Desert After 60 Airstrikes In 72 Hours
+
The Largest US Foreign Policy Blunder Since Vietnam Is Complete: Iran Readies Massive Syrian Ground Invasion

This is going to hurt Hillary's poll numbers but probably not Jeb who's already below 5%.
I hope Kerry is getting in some sailing off Nantuckett this weekend. gwb

TSB: Back in July or Aug I thought my computer got hacked. I called the brokerage guy and told him I couldn't access my acct. He acted real worried,checked and got me in assuring me nothing was haywire. No problems since then but today I got this email: Dear Client:
We are writing to share with you important information about a security compromise involving a database containing some of your personal information, as well as steps we are taking in response, and the resources we are making available to you. (It looks like the Chi-coms got all the Scottrade database back in late 2013 and it's been kept secret til today.) Now I have the best ID theft protection for the next 3 years free! Thank god I moved the gold bullion down to Santa Fe! This should be good for the next time I get called for Jury Duty too!) gwb