I Think We Need a Higher Fence 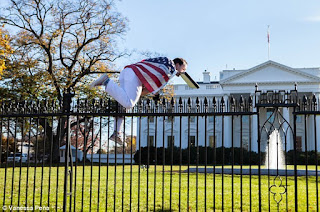 The luckiest man in Washington DC today is the guy who jumped over the White House fence and then, by some almost unbelievable stroke of luck, or by an only slightly less unbelievable lapse of security, was not immediately shot to death.


A man draped in an American flag was taken into custody Thursday afternoon after he jumped the fence of the White House while the first family was inside celebrating Thanksgiving.

Joseph Caputo faces criminal charges after he scaled over the north fence line of the grounds and was immediately apprehended about 2:45 p.m., said Robert Hoback, a spokesman for the Secret Service. Officials did not provide details on Caputo’s age, home town or any reason for the jumper’s actions.

The Secret Service did not immediately provide further details of the incident, and officials were working to determine how the man made it past new “pencil-point” spikes added to the White House perimeter this year to deter intruders.


The WaPo article links to more on the "pencil-point" spikes, but really, isn't it obvious how the jumper made it past them? They are a pathetic excuse for an anti-climb fence topping, being only a few inches high. That's how he made it past them.

Hey Secret Service officials, you can stop working to determine how this happened and start working on getting a higher fence.

It's getting harder and harder to deliver the President's daily security briefing.

Wearing a flag/cape was a good idea, and so was making that 10.0 gymnast landing. Maybe he had the White House snipers momentarily confused.

TSB: There is nothing like that feeling that you are the only one late for Thanksgiving Dinner and you may not be dressed properly! gwb