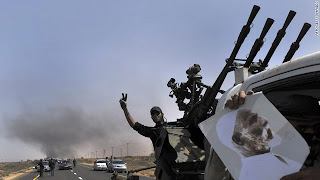 I noticed this photo on CNN today, and it made me wonder who that - obviously revered - gentleman is whose photo Libyan rebels were displaying as they drove to Sirte.

I feared he might be an Al Qaeda leader or a radical mullah. But, a bit of googling later, I learned that he is Omar Mukhtar, the political-religious figure who led native resistance to Italian colonization of Libya from 1912 to 1931. Anthony Quinn played him in the movie.

Speaking of national heroes when do you think the Marines will land?

I'm betting near Tripoli about April 14th to deal with the humanitarian crisis that Mohammar's intransigence becomes. GWB

Ooops! No air support yesterday in Libya! And no one can get anyone on the phone in Tripoli. Looks like the hand off to NATO led to a big counter
attack.Even Rachel Maddow is scratching her head over "Operation
Provide Confusion" GWB

Coalition efforts are not great ones for clarity, or even unity of purpose. As we talk more about arming the rebels, expect to see more and more coalition partners drop out.

In the end, we might be down to a neo-colonial solution, with the French playing the role the Italians used to play.

TSB:You nailed it!! Here is your
neocolonial solution. I didn't know we had a CIA asset leading the rebels
til I read Pepe Escobar today.

Neo-colonialism might be the way it ends up. But I don't think that ex-General who is now in charge of the rebel army was an "asset" of ours. Several thousand very colorful refugees live in Northern Virginia: Vietnamese, Kurds, Ethiopians, Russians, Mongolians - the list goes on and on. Most of them are yesterday's news, and the CIA can't begin to employ or even debrief them all.

For years, my favorite little neighborhood pizza place was run by General Loan, the Vietnamese National Police Chief who famously executed a captured VC in front of an NBC News camera during the Tet Offensive. Another ex-General more or less is no big deal here.

Here's some background on the new rebel-in-chief:

Thanks! I saw General Loan interviewed on tv a while back. Real interesting guy. GWB

His family still lives in the area. Eddie Adams, the photographer who took the famous photo of Loan and the VC, regretted it later since he thought it contributed to Loan being wrongly persecuted.

Historical trivia: the revolver Loan used had been a gift from the U.S. Embassy's Regional Security Officer.

TSB:Since you have worked with all the parties who do you think leaked this "Obama signs secret CIA thing"?

I'm guessing DOD is in horror over what Secy Clinton is about to get them into. (And the CIA probably isn't too excited about it either!)

Sometimes leaks just happen, especially when the activity wasn't the kind that can stay secret anyway.

For for the kind of leak, ask yourself: who benefits? The White House benefits here, I think, since they have been getting badgered for not doing what - it turns out - they were in fact doing.

TSB: Common! You need to be more SKEPTICAL! (lol) Remember who is used to pushing who around.. like when the generals told Obama he had no choice to wind down in Afghanistan. I think the Marines are having nightmares about "FOB Benghazi, Misrata, Keersarge." GWB

I've quoted you and linked to you here: http://consul-at-arms2.blogspot.com/2011/03/re-fitting-inspiration.html