Gaffes and Guns (Or, What To Do About Libya?) 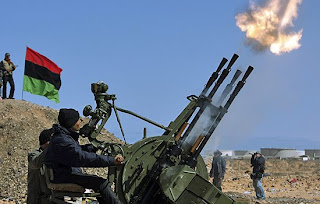 Last Thursday, our two most important intelligence officials committed an official gaffe - meaning, they blurted out the truth - while testifying before a Senate committee:

Director of National Intelligence James Clapper told a Senate committee on Thursday that he believed Libyan dictator Muammar al-Qaddafi and his regime would prevail in their struggle against opposition forces, that China and Russia pose the greatest threat to the United States, and that Iran has not restarted its nuclear weapons program.

"I just think from a standpoint of attrition that over time, I mean, this is kind of a stalemate back and forth, but I think over the longer term that the regime will prevail," Clapper said to Sen. Joe Lieberman (I-CT) at Thursday's hearing of the Senate Armed Services Committee. The comments so surprised Lieberman that he asked Clapper to confirm them.

"You said you were concerned or thought that in the long run the regime might actually prevail because of its superiority in logistics, weaponry, and the rest. Did I hear you correctly?" Lieberman said.

Both Clapper and Defense Intelligence Agency Director Ronald Burgess said they believed the opposition could not displace Qaddafi.

"He's in this for the, as he said, long haul," said Burgess. "So right now he seems to have staying power unless some other dynamic changes at this time."

Naturally, this led to calls for Clapper to resign. But it might, more productively, have led people to wonder how we can change the dynamics in Libya so as to favor the Libyan rebels.

Right on cue, the next day Foreign Policy had a post from a former State Department official recollecting how we did just that back in his day, when Libya was fighting an inept and poorly equipped opposition in Chad.

As the world debates how best to stop the slaughter in Libya, it's worth remembering that the United States has successfully countered Muammar al-Qaddafi's military before.

With so much on the agenda of senior officials [in 1983], there was -- by today's standards -- a lot of flexibility given to lower-level experts and operations officers. From our perspective, the Libyan problem was one that the United States could address, within certain political limits. The key point was that we did not want to get out ahead of the French in Chad. Nor did Washington want to inadvertently inherit Chad as "its" problem. We had enough other crises on our plates. Nevertheless, we did not want Qaddafi -- or anyone else, for that matter -- to think that the United States would acquiesce to such aggression without paying a price.

Although today Qaddafi's security forces are fighting a defensive battle on their home turf, there are important similarities to the Chadian events. Chiefly, the United States presumably wants to limit its political commitment, and the nature and type of aid it may consider is also limited. But so are the needs of the Libyan opposition.

Assuming the rebels can achieve at least the level of organization and training of the Chadians, the material and training support can be rudimentary and accomplished quickly by outside experts, from either a government (France comes to mind, since the country has been first off the mark to recognize officially the opposition in Libya) or even a private company.

[TSB note: Oil shipments have continued from Libyan ports controlled by the rebels. Who is getting that oil revenue, and how much of it are they willing to spend to win the jackpot?]

The most obvious military risk to the opposition is from helicopter gunships and possibly aircraft (the accuracy of Libyan bombing is dubious and the military effectiveness minimal, but the effects on civilians can be horrible). The United States provided Stinger missiles to the ragtag Chadian forces with significant effect. Back then, accounting for the missiles was easier given the very small numbers. Today, if Stinger missiles or similar Soviet weapons were deployed to Libyan opposition forces, the risks of loss would be manageable, and providing such missiles would certainly be cheaper and less of a commitment than establishing a no-fly zone. And if Qaddafi's forces summon forth heretofore unseen skill and/or courage, a decision on more elaborate air defense could be made later.

For now, however, let's recognize that there are options for arming and training the Libyan opposition that do not require the massive military and political commitments of a no-fly zone.

White House spokesman Jay Carney has said that it would be "premature" to arm the rebels at this point, because the administration is not yet finished dithering about the matter. Those weren't his exact words.

State Department spokesman Philip Crowley (who gaffed pretty badly himself this week, by the way) pointed out that there is a UN Security Council resolution banning all weapon shipments to Libya. So, we would be risking the legal and moral condemnation of Security Council members such as Russian and China if we helped rebels to obtain arms with which to defend themselves against a tyrannical regime, and, we wouldn't want to do that because ... that would be bad because ... uh, I've lost my train of thought here. What was I saying?

I don't often see much wisdom in Rambo movies, but this nugget from the last one is starting to sound good to me:

Rambo: Are you bringing any weapons?
Professional Do-Gooder: Of course not.
Rambo: You're not changing anything.

I've quoted you and linked to you here: http://consul-at-arms2.blogspot.com/2011/03/re-gaffes-and-guns-or-what-to-do-about.html