Remain Calm!! All Is Well!! 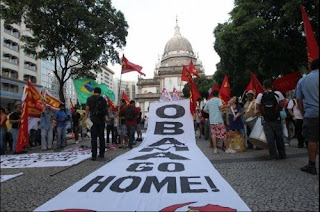 The natives are restless in Rio de Janeiro, where there was a sustained and violent protest directed at the U.S. Consulate last night, just as President Obama arrived.

I've seen nothing whatsoever about this in U.S. news media so far today, but according to local press reports (here and here), the protesters consisted of labor, student and peasant groups. Specifically, the Central Unica dos Trabalhadores, the Sindipetro (Union of Oil), the National Union of Students, and the Landless Movement. They assembled in front of the Candelaria church in downtown Rio, and proceeded up Rio Branco Avenue to the U.S. Consulate.

Note to self: do Rosetta Stone Portuguese. A language that can make riot control devices sound so pleasant and lyrical is a must-learn.

Local press reported that the Consulate security guard was treated for burns at a hospital, and a local radio reporter was treated for injuries caused by a rubber bullet.

Judging by the photos I found online, it was a pretty severe disturbance. 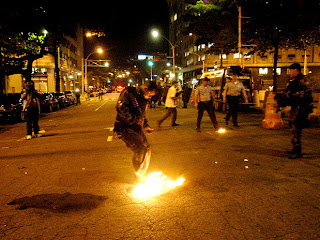 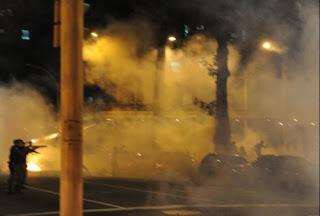 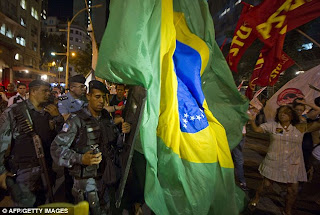 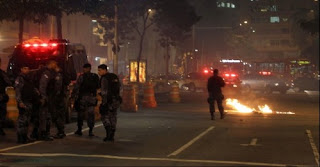 There is nothing about any of this at the Consulate's website. I think that's curious, but I suppose they are consumed by the effort of supporting the POTUS visit.

As a public service, I am embedding the following video which the Consulate is free to send out as a Warden Message:

TSB: I JUST HEARD SECY CLINTON WHILE WAITING FOR 1ST COFFEE. EVERYTHING IS FINE EXCEPT WE HAVE LOST WARREN CHRISTOPHER. IS THAT ABOUT IT? gwb

I don't know that everything is fine, but, after her press conference in Paris, things are looking up a little bit for the Libyan rebels.

TSB: Did you notice that Secy Clinton
said on Friday that Gadaffi must go
but today that was all erased both her and the media? lilGWB