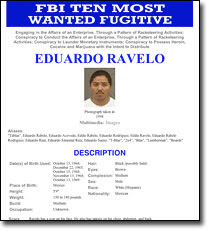 It was one year ago this week that two employees of U.S. Consulate Ciudad Juarez were murdered in simultaneous attacks for reasons that are still - to me, at least - somewhat murky.

Yesterday, the U.S. Justice Department announced it has charged ten persons, all of them members of a criminal gang that operates on both sides of the U.S.-Mexico border, with those murders:

“The indictment unsealed today represents our continued action to ensure safety along our Southwest border, to seek justice for victims of violent crime in this region, and to weaken dangerous criminal organizations currently operating in Mexico and the United States,” said Attorney General Holder. “These arrests and criminal charges will disrupt Barrio Azteca’s current operations, and they reaffirm that we will not tolerate acts of violence against those who serve and protect American citizens. We will continue to stand with our partners in Mexico, and together, build on our unprecedented joint efforts to combat violence and protect the safety of the American and the Mexican people.”

“The indictment unsealed today offers a chilling picture of a highly organized, and extremely brutal gang,” said Assistant Attorney General Breuer. “The victims – like so many other victims of the Mexican drug wars – were senselessly caught in the crosshairs of a violent criminal enterprise. This is, at times, a gruesome battle. But let there be no mistake: we will devote our might to bringing Barrio Azteca and other gangs to justice for their acts of violence and intimidation along our border.”

“The vicious murders of Leslie Enriquez, her husband Arthur Redelfs, and Jorge Salcido illustrate how senseless the violence perpetrated by the drug cartels and their affiliated criminal gangs has become,” said U.S. Attorney Murphy. “Our hearts go out to the families of these three innocent victims, as well as thousands of others, who have suffered tragic losses for which there can be no reparation. The indictment reflects our resolve to vigorously pursue those responsible for these wanton acts and hold them accountable under the rule of law.”

“Trans-border violence is a serious threat that we are using the power of partnerships to combat and prevent,” said FBI Executive Assistant Director Henry. “Along with our other federal, state and local law enforcement counterparts, we are especially grateful to our Mexican partner agencies for the critical support they provided to help resolve this case and bring the subjects to justice. We may stand on opposite sides of the border, but we stand together on the same side of the law.”

Jose Antonio Acosta Hernandez, aka “Diego”; Eduardo Ravelo, aka “Tablas”; Luis Mendez, aka “Alex”; Arturo Gallegos Castrellon, aka “Benny”; Ricardo Valles de la Rosa, aka “Chino”; Jose Guadalupe Diaz Diaz, aka “Zorro”; Martin Perez Marrufo, aka “Popeye”; Luis Humberto Hernandez Celis, aka “Pac”; Miguel Angel Nevarez, aka “Lentes”; and Enrique Guajardo Lopez, aka “Kiki” are charged in the indictment with conspiracy to kill persons in a foreign country, murder resulting from the use and carrying of a firearm and murder in aid of racketeering for their alleged participation in the murder of Enriquez, Redelfs and Salcido.

Hernandez, Ravelo and Mendez are currently at large. The United States has filed provisional arrest warrants with the government of Mexico for the arrest of these men in connection with this case. Ravelo is currently one of the FBI’s Top Ten Most Wanted Fugitives, and the FBI is offering a reward of up to $100,000 for information leading directly to his arrest.

If convicted, the defendants face a variety of maximum penalties per charge, including up to life in prison.

So, justice is getting a little closer to those who ordered and carried out those murders, not that it can be any compensation to the families of the three victims.
Posted by TSB at 7:50 AM
Labels: Barrio Azteca, Lesley Enriquez Redelfs, U.S. Consulate General Ciudad Juarez

He was in essence begging her to please meet behind closed doors with members of congress to tell them what is really going on with the violence in Mexico. She said she thought that would be a great thing to do very soon. Kay Granger
(Chairwoman/TX)chimed in... WE ARE SCARED TOO! They are tired of being stonewalled by her. GWB

PS: What to you think about the Quadrennial Review? According to
Secy Clinton yesterday it's all done and has already produced incredible results which she highlighted for the committee. That wasn't a "dog and pony" was it?? GWB

The Quadra-who-now? I never was able to connect the dots between that big paperwork exercise and any changes in operations, much less to any actual results.

I didn't see her testimony but I read her opening statement, where she said the Quadra-whatever had led State to cut in half development assistance to twenty counties. So there's that.