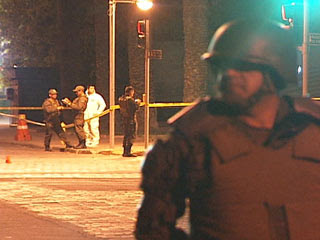 About 10 PM last night, just before President Obama arrived in Chile, someone tossed a small bomb into the front yard of the Instituto Chileno-Norteamericano de Cultura in Viña del Mar. The bomb was so small that some local reports referred to it as a "noise bomb." Windows were broken, but no one was injured. There was no claim of responsibility.

Viña del Mar is not on the President's itinerary.

The Instituto is a Binational Center, an autonomous institution governed by boards of local citizens and employing local staff, which have long been a mainstay of U.S. public diplomacy efforts in South America. The BNCs in Chile were established in 1941.
Posted by TSB at 11:45 AM