Will Julian Assange Fade Away? 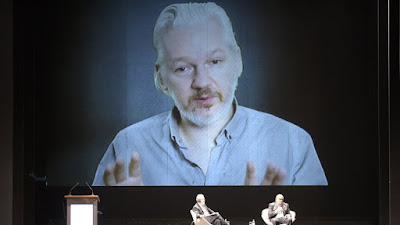 Assange has been staying in the dark for three years now, shut up in Ecuador's London embassy and getting paler by the day while waiting for criminal charges placed against him in Sweden to expire. Three of four charges have now expired but a fourth charge, of rape, remains.

Last week, the London Metropolitan Police announced they are removing their static guards from outside the Ecuadorian embassy. But they aren't letting Assange go ghost. Rather, they say they "will deploy a number of overt and covert tactics to arrest him."

Good luck to them. Judging from that recent photo, Assange leaves very little sign anymore. He could sneak out on a bright day and not be spotted.

TSB: This is wild! Putin and BiBi coordinating air traffic over Syria while US tries to pick up on the conversation. That is 'leading from behind' on a new level. gwb

or wait for a SNOWSTORM! gwb