Beyond Capitol Thunderdome: Can't Anybody Read? 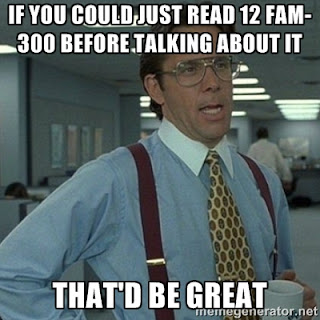 I mentioned this before, on the evening of the first day of the marathon Benghazi Select Committee hearing - or was there only one day? It seemed like more - but it continues to bug me that there is so much confusion over the rather important question of whether or not the SecState waived legal requirements and security standards for the facility in Benghazi.

The mistaken impression that Hillary Clinton either waived or failed to waive the requirements of the law pertaining to the Special Mission facility in Benghazi appears to have set in as one of the few gotchas to come out of the hearing. That impression is mistaken because SECCA applies only to overseas diplomatic facilities that have been notified to the host government as diplomatic premises, such as chanceries and consulates. The policy for applying SECCA is established in Foreign Affairs Manual 12 FAM-300, which is publicly available. According to the report of the Accountability Review Board (ARB) - which is also publicly available - the facility in Benghazi was not notified to the host government as a diplomatic premise, therefore the law did not apply and it did not require a waiver.

Anyone interested in this matter can read 12 FAM 300 for himself and see what I'm talking about. Here's a tip: read the entire thing starting from the top, and don't skip the part that states how diplomatic facilities are defined for the purpose of applying SECCA. For some reason, journalists, Congressional staffers, and commentators who quote from it, are skipping ahead to the part they like, where the SecState has waiver authority that may not be delegated, and ignoring the all-important bureaucratic minutia of 12 FAM-313, paragraph b.

But what do I know? Here a report from Breitbart which quotes the back-and-forth between Rep. Susan Brooks and Hillary Clinton that constitutes the smoking gun of this false allegation:


Brooks asked, “Congress passed something referred to as SECA, the Secure Embassy Construction and Counterterrorism Act, which requires the secretary of state to issue a waiver if under two conditions if US government personnel work in separate facilities, or if US overseas facilities do not meet security setback distances specified by the Bureau of Diplomatic Security. the law specifies that only the secretary of state may sign these waivers, and that requirement is not to be delegated. Was a waiver issued for the temporary mission in Benghazi, and the CIA annex after the temporary mission compound was authorized through December of 2012? And did you sign that waiver, Madame Secretary?”

Hillary answered, “T think that the CIA annex, I had no responsibility for, so I cannot speak to what the decisions were with respect to the CIA annex.” She did acknowledge she was responsible for the temporary mission compound before continuing, “I had no responsibility for the CIA annex, obviously. The compound in Benghazi was neither an embassy nor a consulate. Those are the only two facilities for which we would obtain a formal diplomatic notification, and those were the only kinds of facilities that we would have sought waivers for at the time, because we were trying to, as has been testified to earlier, understand whether we were going to have a permanent mission or not. That means you have to survey available facilities, try to find a secure facility, and the standards that are set by the inter-agency Overseas Security Policy Board are the goals we try to drive for. But it is very difficult, if not impossible to do that in the immediate aftermath of a conflict situation. The temporary mission in Benghazi was set up to try to find out what was going on in the area, to work with the CIA, where appropriate, and to make a decision as to whether there would be a permanent facility. So, we could not have met the goals under the Overseas Security Policy Board, nor could we have issued a waiver, because we had to set up operations in order to make the assessments as to whether or not we would have a permanent mission, whether that mission would remain open, and we made extensive and constant improvements to the physical security, some of which I mentioned before.”

Hillary answered the question correctly, i.e., the Special Mission facility was not a chancery or consulate and those are the only types of facilities that would need waivers. But then she rambled on about other matters until she seemed to be saying that the uncertain duration of the Mission was the main thing.

Another commentator who seems to have poor reading comprehension is Victoria Toensing, who is confused by both 12 FAM-300 and the Benghazi Accountability Review Board report.

This is Toensing's critique of Rep. Brook's inept questioning of the witness - By law, Clinton was required to waive the security in Benghazi and could not delegate that decision:


Repeatedly, the Committee allowed Clinton to claim she had nothing to do with security in Libya. Such requests “were rightly handled by the security professionals…. I did not see them. I did not approve them. I did not deny them.” However, the Secure Embassy Construction and Counterterrorism Act of 1999, SECCA, passed in the wake of the 1998 Embassy twin bombings in Africa when Bill Clinton was president, required her to rule on the substandard security in Benghazi.

As with Benghazi, an Accountability Review Board (ARB) for each African bombing was convened. The ARBs faulted the State Department for no accountability for the security in Kenya and Tanzania, and made specific recommendations for future Secretaries of State. But Congress went further. SECCA requires the Secretary to waive any situation where all the embassy buildings are not housed in one facility, as was the case with Benghazi, and states that the decision cannot be delegated.

For a long time, the Committee seemed to be aware only of the ARB language, quoting it extensively while ignoring the statutory mandate. Finally, during the dinner hour, Rep. Susan Brooks broached the issue but clearly did not understand the law. When Sec. Clinton demurred she did not sign a waiver because the Benghazi consulate was “temporary,” Brooks abandoned the subject. But Brooks’ acquiescence missed the point of the law. It was intended to cover such “temporary” facilities.

The Benghazi ARB admitted in its 2013 report that there had been a waiver, describing the Benghazi compound as being “excepted” under the law. Was no one on the Committee aware of that fact? An obvious follow up question: “But Ms. Clinton, who did the ARB refer to when saying Benghazi had been excepted?” And then: “If you did not sign the waiver, who did?” But the Committee let her escape an admission of violating the law by falsely claiming it did not cover a temporary facility.

Toensing is berating the Committee members and staffers for being unaware of this passage in the ARB report:


Another key driver behind the weak security platform in Benghazi was the decision to treat Benghazi as a temporary, residential facility, not officially notified to the host government, even though it was also a full time office facility. This resulted in the Special Mission compound being excepted from office facility standards and accountability under the Secure Embassy Construction and Counterterrorism Act of 1999 (SECCA) and the Overseas Security Policy Board (OSPB). Benghazi’s initial platform in November 2011 was far short of OSPB standards and remained so even in September 2012, despite multiple field-expedient upgrades funded by DS. (As a temporary, residential facility, SMC was not eligible for OBO-funded security upgrades.) A comprehensive upgrade and risk-mitigation plan did not exist, nor was a comprehensive security review conducted by Washington for Benghazi in 2012. The unique circumstances surrounding the creation of the mission in Benghazi as a temporary mission outside the realm of permanent diplomatic posts resulted in significant disconnects and support gaps.


Did the ARB Report really say that the SecState, or anyone else, had signed a SECCA waiver for the facility in Benghazi? Is that what the report means by "excepted" from the law?

No. The report clearly states that because the facility was not officially notified to the host government, SECCA did not apply, which resulted in the facility being excepted from both SECCA and overseas security standards.

Sorry, but there is no smoking gun here. And I say that as someone who does not have any personal, professional, or political fondness for Hillary.

To bad Skep, but it's Washington. In Washington truth is at the bottom of the list of things that matter.

You remind me of the Jack Nicholson movie - "forget it Jake, it's Chinatown."