Al-Qadhafi: The Sheik of Tripoli? 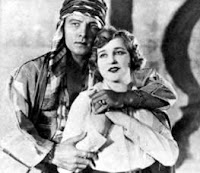 
I knew that Muammar al-Qadhafi was smitten by former SecState Condoleezza Rice. He made that abundantly clear in an interview with Al-Jazeera television last year:

"I support my darling black African woman," he said. "I admire and am very proud of the way she leans back and gives orders to the Arab leaders. ... Leezza, Leezza, Leezza. ... I love her very much. I admire her, and I'm proud of her, because she's a black woman of African origin."

But I didn't know that he tried to close the deal with Leezza by giving her a ring and a locket. The Washington Post has an item today on gifts given to U.S. officials by foreign dignitaries last year which notes the following items from Qadhafi were accepted by Secretary of State Condoleezza Rice:

I'd like to know which DVD the desert romantic picked out for Leezza. Back in my day, A Man and a Woman was the ultimate make-out movie, but that's so old it's probably not even available on DVD. Chick Flicks definitely don't seem like Qadhafi's style. My guess is the 1921 Rudolph Valentino silent film The Sheik, which is racy but still dignified. The musical instrument? That was most likely an Oud, something on which he could strum traditional Libyan music while wooing Leezza in his tent.

Condoleezza would be well advised to take out a restraining order. She no longer has a security detail, and Qadhafi seems like the type who might stalk her.
Posted by TSB at 9:34 AM
Labels: Al-Qadhafi, Condoleezza Rice