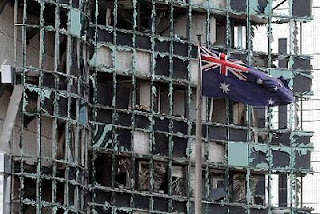 The flag flying at the Australian Embassy in Jakarta after a suicide car-bombing, September 9, 2004

The Australian news media is reporting on plans for the construction of a secure new embassy complex in Jakarta, Indonesia, to replace the chancery office building that was attacked by a terrorist bomber in 2004.

Work on a $415 million high-security Australian embassy in Jakarta will begin late next year, six years after a Jemaah Islamiah terrorist bombing that killed five people and injured more than 150 others.

The new chancery will be “bomb-proofed” and house 14 federal government agencies, 123 Australian and 273 local staff, Defence Secretary Mike Kelly said today.
Mr Kelly today submitted budget plans for the new embassy with a start date for construction next year and completion scheduled for 2014.

In 2004, a suicide bomber detonated a minivan loaded with more than one tonne of explosives outside the embassy.

"The government approved the relocation of the Jakarta mission on security grounds. The new site will enable appropriate setbacks to buildings for blast mitigation while the buildings themselves will be designed to resist blast,” Mr Kelly said.

"While the new development is driven by the imperative to provide more secure accommodation, a rapid increase of staff in the Jakarta mission over recent years has resulted in the chancery being seriously overcrowded and dysfunctional.”

Construction is expected to start late next year, subject to parliamentary approval.

The project will involve construction of a secure compound, including a chancery of about 20,000 square metres, a head of mission residence, residential accommodation for 32 diplomats and their families, recreational facilities and a medical clinic.

Good for the Aussies. Jakarta is to the Australian Foreign Service what Baghdad is to its U.S. counterpart: the No. #1 critical threat diplomatic post in the world. When a responsible government puts 400 employees in such a car-bomb prone hotspot, it spends the money to provide them with a reasonably secure place to work and live.
Posted by TSB at 4:02 PM
Labels: Australia, Fortress Embassy, Jakarta, terrorism