Political Violence Against Americans in 2008 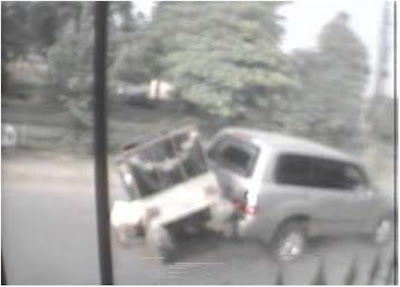 U.S. Consul-General Peshawar's vehicle reversing at high speed out of an ambush kill zone, taking along with it a 'tuk-tuk' auto rickshaw that was in the way

"Ninety percent of threat reports are crap" according to a wise Gringa woman who recently gave me an intelligence briefing on overseas terrorism. For the other ten percent, see the U.S. State Department's 2008 report on Political Violence Against Americans overseas, which was released today. The entire series of annual reports can be found here.

Not all of the incidents ended badly. See the photo above and the summary of that incident on page 43 of the report, for example. Our security elements, which play defense to the terrorist's offense, often had their successes.
Posted by TSB at 12:49 PM
Labels: Department of State, Political Violence, terrorism