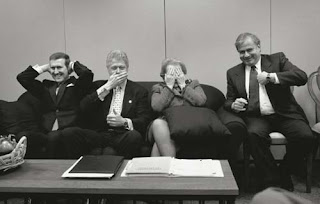 The revolving door between government and government consulting-contracting-lobbying took another spin or two this week as former Secretary of State Madeleine Albright merged her consulting company with that of Sandy "Scissorhand" Berger.

Mrs. Albright, who was secretary of state, currently heads the Albright Group, and Mr. Berger, former national security adviser, leads Stonebridge International. The new company will be called the Albright Stonebridge Group, and will be "the premier global-strategy firm helping clients navigate the intersection between business, finance, government and civil society in markets around the world," the firms said in a statement.

The two companies, as well as The Cohen Group, founded by the Clinton administration's other senior national-security official, former Defense Secretary William S. Cohen, have been in great demand during the past eight years. Mrs. Albright and Mr. Cohen, a former Republican senator from Maine, have been among the most visible and media-savvy "former people," as Mrs. Albright likes to call them jokingly.

Reading news like this, I think back to a conversion I had several years ago with a Turkish government official. He furiously resented a World Bank effort that was going on at that time to combat public corruption, which the Bank saw as an impediment to economic development. The Turk maintained that in the Third World public corruption is more or less benign, since it consists of small amounts of graft broadly distributed throughout society all the way down to the level of traffic cops, whereas the U.S. style of corruption consists of huge amounts of money passed out to a very few people at the top of the government-business nexus. I had no good answer to him then, and I haven't thought of one since.
Posted by TSB at 9:23 AM
Labels: Madeleine Albright, Sandy "Scissorhand" Berger

I liked that Turkish story =) Try explaining to him that awarding Ambassadorships to people who "donate" a lot of money is not "corruption".

Ambassadors and other office-holders, courtiers, rent-seekers (i.e., Federal set-aside programs), jesters and Masques, peerages, royal successions ... sometimes I think the only difference between our present system of government and that of the Elizabethans and Jacobeans is that they wore fancier clothes.

Very interesting comment by the Turk. I tend to agree with that.

About buying ambassadorships, I heard the panel on the McLaughlin Group actually attempt to justify it by saying most of the posts bought are for insignificant countries and that's it always been the case in American politics.

Strange rhetoric I must admit.