Will the Uighurs Feel the Love in Bermuda? 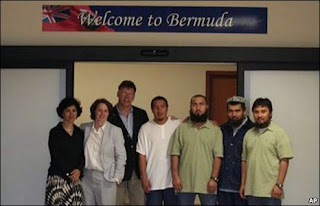 We learned today that four of the Uighurs held at Guantanamo Bay have been shipped to Bermuda. See the Department of Justice press release: United States Resettles Four Uighur Detainees from Guantanamo Bay to the Government of Bermuda.

Four detainees, Chinese nationals of Uighur ethnicity who had been held at the Guantanamo Bay detention facility, have been resettled in Bermuda. These detainees, who were subject to release as a result of court orders, had been cleared for release by the prior administration, which determined they would no longer treat them as enemy combatants. The detainees were again cleared for release this year after review by the interagency Guantanamo Review Task Force.

This marks the first time since 2006 that the U.S. government has successfully resettled any of the Guantanamo Uighur population. In 2006, five Uighurs were transferred to Albania; there have been no reports of post-resettlement engagement in criminal behavior or terrorist activities.

Here's a Bemudian local news story on the detainee transfer, and a statement by the Bemudian Premier.

I wonder how comfortable the Uighurs will be in Bermuda (tourism slogan: "feel the love")? It's pretty much the polar opposite of their Chinese Muslim homeland. They are certain to encounter women wearing shorts and skimpy tops, which will no doubt send them into culture shock. Let's hope the authorities will keep them in some kind of halfway house where they can be slowly acclimated to a subtropical tourist playground, and won't let them out unescorted until they can tolerate the sight of a woman in a bikini without going all Jihadi.
Posted by TSB at 7:45 AM
Labels: Bermuda, Gitmo Gang, Uighurs