An Aesthetic Anti-Terrorism Measure? Who Knew? 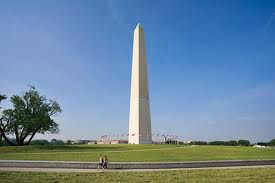 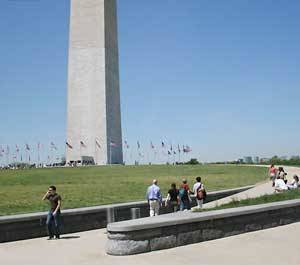 Two views of the 'sunken wall' that surrounds the Washington monument; from the front, and from where the nestled circles intersect with pathways

Today's column by WaPo culture critic Phillip Kennicott (here) must be the only instance of anyone, ever, anywhere, using the phrase "aesthetically pleasing anti-terrorism design."

The occasion was today's public meeting seeking comments on the National Park Service's intention to perform further security upgrades to the Washington Monument.

Here's the text that caught my eye:

The Washington Monument is unlike any other in the capital, so austere and abstract that creating security arrangements for it has dogged the National Park Service for a decade.

Fortunately, plans to build a large, underground visitors center, floated in 1993 and renewed in the security panic after Sept. 11, 2001, never came to fruition. So far, the only permanent security installed at the site - a vehicle barrier made from an artful arrangement of low granite walls, careful landscaping and attractive benches designed by landscape architect Laurie Olin - is one of the extraordinarily rare examples of aesthetically pleasing anti-terrorism designs in the United States.

That aesthetic security feature was described by the WaPo back in 2005, when it was approved for construction:

The primary feature of the project is a series of interlocking rings of ash rose granite wall, standing just 30 inches above the ground. They reach deep enough into the ground and overlap at just the right points to stop an explosive-laden Humvee.

The walls are augmented by retractable posts that can be lowered for maintenance vehicles at four entrances. Atop the mound of earth that is the pedestal for the monument, solid benches of Georgia white marble surround the plaza. To lend some aesthetic beauty, lighting has been installed to better highlight the geometry and stones of the monument, Spulecki said.

The subtlety of the design is its triumph, said Thomas Luebke, secretary of the U.S. Commission of Fine Arts, one of the groups that had to approve the design.

In the eighteenth century, farmers in Europe used low, squat stone barriers called haha walls to pen livestock, Spulecki said. The rock walls meandered up and down the glens of England and the knolls of France in thick lines, sturdy and unobtrusive. Those walls are wide and high enough to keep farm animals in, but they are not noticeable at eye level, he said.

Olin's firm submitted a simple design of concentric rings echoing the haha walls in December 2001, competing with projects that included more bollards and even a moat.

You can see photos at the 'parks, squares, and garden' projects spot on the Olin website (here).

Olin re-used the concept of nested concentric circles of sunken walls, or 'haha walls,' in their landscaping contribution to the design selected for the new U.S. Embassy in London. These drawings show the resemblance. 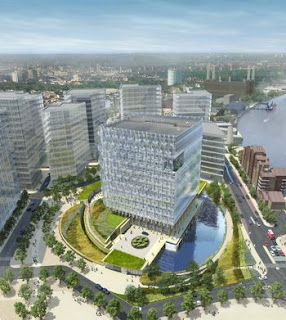 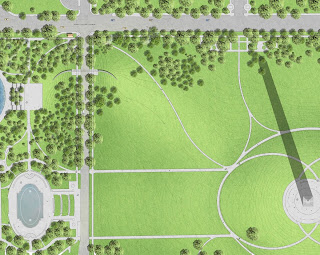 A very elegant (and very old) countermeasure to the nasty (and modern) threat of car bombs. You can walk up, or bike up, to the monument and never know there is a vehicle barrier there. You just can't drive up to the monument.
Posted by TSB at 6:09 PM