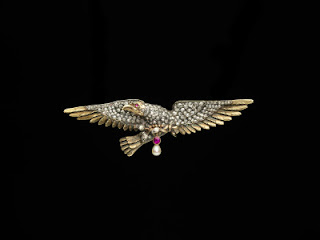 “The brooch is antique, French, and composed of rose-cut diamonds and a gold eagle with widespread wings. It was love at first sight, but I balked at the cost. Saying no to Jim [one of the proprietors of the Tiny Jewel Box], I inwardly promised to reverse that decision should I be named secretary of state...When that possibility became reality, I bought the eagle and chose to wear it for the first time at the swearing in.”

Madeleine Albright's 2009 book about her personal diplomacy-by-broach, Read My Pins: Stories from a Diplomat’s Jewel Box, is the basis for a museum exhibition of her jewelery that was held at the Smithsonian Castle, and it was briefly reviewed this week in the H-Diplo diplomatic history discussion network:

In public appearances as the U.S. ambassador to the United Nations and then as secretary of state, Madeleine Albright was almost never without some sort of pin or brooch affixed to her left shoulder, and she encouraged foreign officials, journalists, and other observers to view her pins as consciously chosen diplomatic statements. Many took up her suggestion and closely monitored her jewelry; a “pin watch” Web site focused on interpreting her daily jewelry choice and its diplomatic implications even sprang up. Albright recently agreed to loan some of her collection to the New York Museum of Arts and Design for an exhibition, which was subsequently on display at the Clinton Presidential Library and the Smithsonian. Read My Pins is the exhibition catalog. The book is of particular value to scholars of diplomacy and material culture, showing how one practitioner employed jewelry to further her diplomatic agenda. It not only tells us that fashion and symbols can be important diplomatic tools, but it also helps us learn how to interpret those elements.

Albright begins her story of the use of her pins as diplomatic tools in 1994, after Saddam Hussein refused to allow UN inspectors into Iraq. Albright criticized him for it, and an Iraqi poet wrote a scathing poem about her, calling her, among other things, an “unparalleled serpent.” When she next met with Iraqi leaders, she chose to wear a serpent pin. While it is not clear whether the Iraqi leaders noticed it at the time, a journalist did and asked her about it; she replied that it was her “way of sending a message.” After that, she actively encouraged people to observe her pins and use them a tool for gauging her mood and political stance.

The foreign officials she encountered while ambassador and secretary were certainly a key audience for the pins’ messages. She could use the pins to say two things at once, suggesting the limits of her politeness. For example, shortly after a Russian spy had been arrested in Washington for bugging the State Department, she met with the Russian foreign minister in Europe. Her choice of pin: a bug. She notes in Read My Pins that she and the minister “greeted each other as the friends we were,” but adds that he “could not fail to notice” the “enormous bug” on her shoulder; the reprimand was there, but she did not have to put it into words. While we cannot be sure if all foreign officials paid attention to the pins, Albright does tell us that Russian President Vladimir Putin reported to President Bill Clinton that he and his staff did so, and the fact that so many foreign officials gave her pins as gifts when she visited their countries indicates that they were aware of Albright’s practices.

You can view a selection of her signifying accessories here.

I suppose it's a trivial topic to spend 176 pages writing about, and jewelry isn't my sort of thing anyway. But hey, symbolism has always played a part in statecraft, so why not an exhibition of Albright's pins?
Posted by TSB at 7:05 PM

Your blog is one of my favorites. Just wanted to let you know I linked to you today.

Sadly, it looks like the exhibit closed mid-October. But, happily for me, I have found your blog. As an FS EFM I am always on the look out for, if I may be so bold, kindred spirits. I'll be back, and often.

Becky, Lindsey, thanks for your very kind comments. Also, thanks for the correction on the Smithsonian exhibition; that's what I get for posting something when I was half asleep.

The border has become one of my favorite places in the world too. Maybe that is one of the reasons I like your blog so much. (That and the awesome clean humor and the great analysis.)

Thanks for a great read. (And I think you get lots of points for only not noticing the date on the exhibit. When I post tired I can't even spell my own name.)