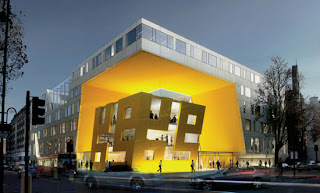 The Iranian government is proposing to build a showplace new embassy in London. The project isn't a hit with the neighborhood, and it might not get local approval, but I think the design has at least one notable element: the public diplomacy center is in a structure that is separate from but encompassed by the embassy office building. (It's the small free-standing cube beneath the overhanging roof in the artist's rendering above.)

plans for a new iranian embassy have been unveiled in london and has sparked controversy amongst locals of south kensington. designed by vienna based iranian architect armin hohsen of daneshgar architects the new embassy will be a six-storey marble and stone structure sporting irregular windows and sharp, clean lines. situated on the corner of manson place and queensgate mews the jutting corner of the building will overhang a smaller sub-structure - a contemporary art gallery and cultural centre.

(Forgive the e.e. cummings-esque lack of capitalization. Such avant-garde touches indicate that the designboom people are creative types - even though they are cribbing from a poet who did most of his work in the 1920s and 1930s - and the rest of us must bear with their idiosyncrasies.)

Having public diplomacy facilities separate from, but on the same compound with, the rest of the embassy is what the U.S. State Department used to do with PD centers back before it went with a standard embassy design approach. A number of older - 1980s and 1990s - new U.S. embassies had an American Center located on the periphery of the compound, with a separate entrance for the public. That allowed the public to access the center with a bit less hassle than chancery visitors went through, and gave the PD section a bit of autonomy. It wasn't fully satisfactory from either a security or a PD program standpoint, but I thought it was a pretty good compromise.

Personally, I'd like to see that come back in fashion.
Posted by TSB at 9:22 AM

Thanks for the post, His correct name is Armin Daneshgar.(I am a persian architect from Glasgow)

Thanks very much for your comment, and for the correction.

I'm following the development of this embassy project with interest, and I still like the idea of a separate and accessible public diplomacy building that is encompassed by the larger chancery.