"It's All About Everybody Recognizing Their Role"

The WaPo reports the unsurprising news that scanners and pat-downs upset airline passengers:

Across the country, passengers simmered over being forced to choose scans by full-body image detectors or probing pat-downs. Top federal security officials said Monday that the procedures were safe and necessary sacrifices to ward off terror attacks. 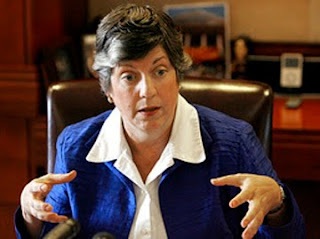 I recognize my role as a passenger, but something about that photo of Secretary Napolitano does not leave me reassured.
Posted by TSB at 4:09 PM