The Narcos Do a Poster Show 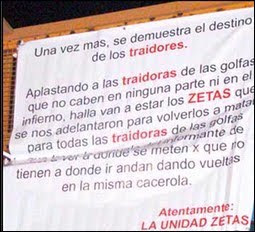 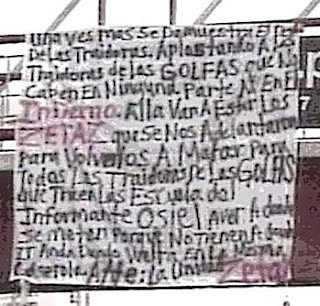 H/T to Blog del Narco for today's post on the narcomantas, or message banners placed by narco cartels, that appeared in cities across Mexico the day after the death of Gulf cartel leader 'Tony Tormenta' in Matamoros (here).

Narcomantas are a primary means by which the cartels make announcements to the public, and they are quickly removed by the police and military.

According to Blog del Narco, these mantas appeared in several different cities and states (including San Luis Potosi, Puebla, Monterrey, Juarez, Veracruz, Tampico and Reynosa, among others) simultaneously, and bore identical messages from the Zeta cartel denouncing its rival, the Gulf cartel. The text amounts to the Zetas celebrating the death of Tormenta, which 'shows once more the fate of traitors.'
Posted by TSB at 5:31 PM