Pay No Attention to That Little Screen Behind the Curtain

The Hindustani Times has reported that President Obama will use his customary teleprompters when he delivers a speech at India's Parliament House on Monday.

They sound surprised, since Indian politicians normally speak extemporaneously, and only their television newsreaders use prompters. Either that, or the Hindustani Times writer is a master of subtle irony.

According to parliament sources, a technical team from the US has helped the Lok Sabha secretariat install textbook-sized panes of glass around the podium that will give cues to Obama on his prepared remarks to 780 Indian MPs on the evening of Nov 8.

It will be a 20-minute speech at Parliament House's Central Hall that has been witness to some historic events, including first prime minister Jawaharlal Nehru's "tryst with destiny" speech when India became independent.

Obama will make history for more than one reason during the Nov 6-9 visit. This will be the first time a teleprompter will be used in the nearly 100-feet high dome-shaped hall that has portraits of eminent national leaders adorning its walls.

Indian politicians are known for making impromptu long speeches and perhaps that is why some parliament officials, who did not wish to be named, sounded rather surprised with the idea of a teleprompter for Obama.

"We thought Obama is a trained orator and skilled in the art of mass address with his continuous eye contact," an official, who did not wish to be identified because of security restrictions, said.

Obama is known to captivate audiences with his one-liners that sound like extempore and his deep gaze. But few in India know that the US president always carries the teleprompter with him wherever he speaks.

Teleprompters, also called autocue or telescript, are mostly used by TV anchors to read out texts scrolling on a screen and attached to a camera in front of them.

Well, prepare to be surprised India, because our President never, but never, addresses any kind of audience extemporaneously. Not even a 6th grade classroom. 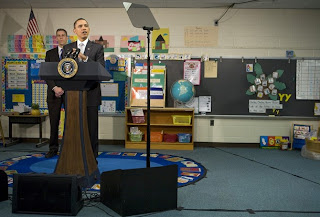