After Obama's Election "the Plaque Stirred" 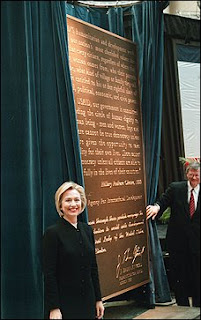 Wow, that's a really big plaque. Judging by the scale of the thing, it might be part of the Lincoln or Jefferson memorials. But, no. The WaPo's Al Kamen reports it is the centerpiece of a shrine that USAID erected to first lady Hillary Clinton back in the day:

Twelve years ago, the U.S. Agency for International Development turned its lobby in the Ronald Reagan Building into a shrine to then-first lady Hillary Rodham Clinton. Its centerpiece was an 800-pound bronze plaque, 6 feet wide by about 9 feet high, bolted to a marble wall.

The plaque, which cost $27,388, plus tens of thousands more for shipping and installation, had an engraved excerpt from a speech she gave about "expanding the circle of human dignity."

Then there was this fulsome bit from the USAID administrator at the time, J. Brian Atwood: "May all who pass through these portals recognize the invaluable contribution to worldwide development made by the First Lady of the United States, Hillary Rodham Clinton."

The plaque was sent to a government warehouse in Maryland, where, as we wrote at the time, it lay "peacefully . . . waiting, waiting" for the next eight years [of the George W. Bush administrations].

But after President Obama's election, the plaque stirred.

It began positively quivering on Jan. 23, 2009, when Secretary of State Clinton went to USAID and mentioned that she had been "quite honored upon leaving the White House to have a plaque put up in the lobby recognizing my work."

"And if anybody knows where that plaque is - [laughter and applause] - you know," Clinton continued with a playful smile, looking at someone just off the stage to her right, "I'd just love to see it again. [Laughter.]"

The USAID people got right to work on that, but they couldn't displace a memorial to fallen employees. So, for an estimated $30,000, the agency, in the fall of 2009, was preparing to schlep the plaque from storage to put it up on another wall in the lobby.

After our inquiry, however, Clinton said she wanted no public funds used to put the plaque back up. And what she said that January "was a joke - not an RFP," or request for proposal, a Clinton aide said.

"We took some preparatory steps," a USAID statement said, such as ripping down part of a marble wall, "but have decided not to proceed with re-hanging the plaque."

But now they've apparently raised the money (not clear from whom), because workers have been on scaffolding preparing the wall to hold the plaque.

I appreciate a good cult of personality as much as the next small "r" republican. So I'm pleased to see that Foreign Policy's Madam Secretary blog is also unenamored:

Thank goodness private -- not public -- funds are apparently being used to rehang the plaque (on another wall in the lobby, so as not to disturb the memorial). And nothing personal against Clinton, but no living person should be glorified in this manner. (As for someone who's deceased and whose legacy has stood the test of time, that's another matter.)