I must have watched this video clip three times while dawdling over breakfast this morning. I'm sure it would be slightly confusing at any time of day - watching it, you keep checking to see if it's an old press conference from ten years ago, or you wonder whether Obama has called in a substitute POTUS over the holidays, or you remark to yourself that Saturday Night Live parodies have never been better - but the best time of day to watch it is when you're already slightly groggy and slow on the uptake.

MSNBC has nominated its picks for the most awkward parts of this strange presser. From 1 to 10, they are: 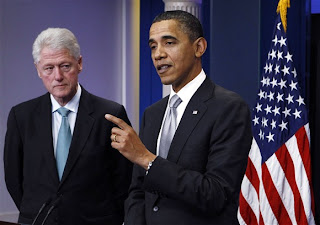 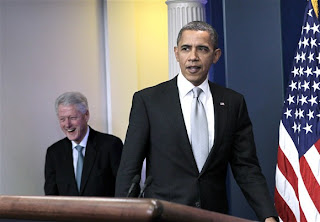 “I’m going to let him speak very briefly and I have to go over and do one more Christmas Party,” Obama says, turning the mic over to the former president. 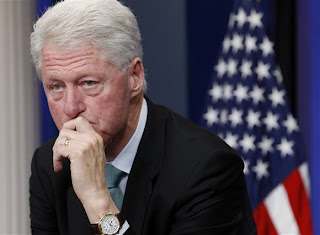 Even if he’s actually happy to take over, Clinton makes it seem like he feels abandoned. “First of all I feel awkward being here and now you’re going to leave me all by myself,” he says. 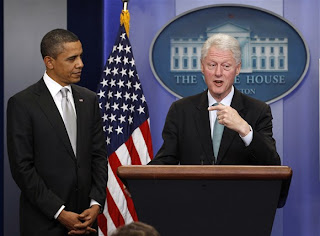 This brings us to the core awkwardness: The fact that Clinton is doing a White House press conference 10 years after he left office.

5. [My favorite] Clinton keeps talking ... and talking and Obama just stands there 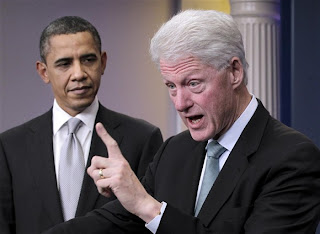 As if it isn't weird enough that Obama said he had to leave, but then didn't, Clinton keeps blabbing away about taxes and the economy while President Obama stands there looking like a demoted (or is it relieved?) beauty queen. 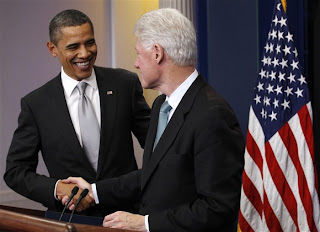 Seemingly tired of watching Clinton speak, Obama says he has to go because the first lady is waiting. “Here’s what I’ll say, I’ve been keeping the first lady waiting for about 10 minutes. You’re in good hands.” (Find it at 10:33 here.) He then offers a strange smile. 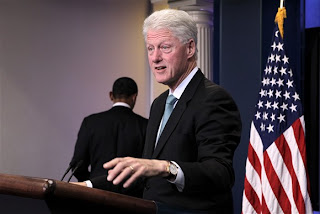 As Obama exited the room, Clinton offered “help me,” presumably in reference to Obama’s declaration that Gibbs would call last question. (See it at 10:38 here). But then it got weirder as Clinton told the president, “I don’t want to make her mad, please go.” Who can
publicly order the president to "please go" other than a previous president? 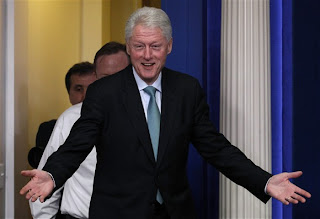 We didn't know that presidents could call "sub" like you do in a soccer game. But that's sure what it felt like. 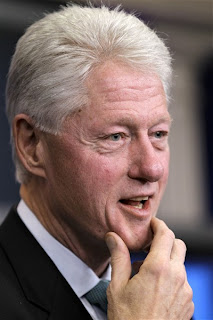 President Obama said Press Secretary Robert Gibbs would call last question, but he never did. Instead, Clinton ended the long, bizarre press conference. Did the White House lose control? Was it intended as a fun game of Chinese fire drill, White House style? Maybe, maybe not, but we can already hear conservative radio have a LOT of fun with this

10. The fact that Clinton just delivered what will likely be the most-watched policy statement of the year 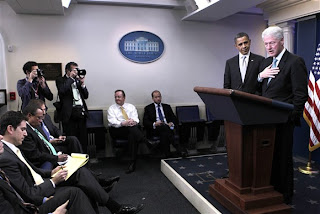 Will this go viral? Yes. In other words, a former president just delivered what will will be the Obama administration's most-watched economy policy statement of the year. Because the current president went to a Christmas party ... or wait was it to meet his wife?
Posted by TSB at 8:55 AM

I had scintillating commentary to add, but I'm left speechless after watching the video clip the second time.

What struck me most the second time I watched it is the way the White House press corps ignored Obama and directed all their questions to Clinton. Like there had been a reverse succession (regression?) of administrations.

Obama keeps a good poker face, but you have wonder what was going on in his mind during the ten minutes he hung around silently on the fringe of Clinton's press conference.