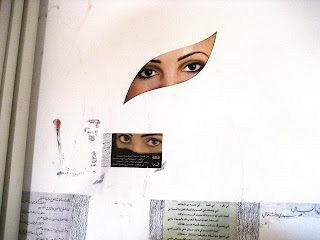 Some people - and by "some people" I mean my wife - misunderstand it when I laugh at a satirical treatment of women in strict Islamic societies, such as "Burka Woman", because they think I'm laughing at the women in the Burkas rather than at their societies.

So I am very pleased to report that an actual woman in a Burka also finds that video hilarious.

Check out the blogger Saudiwoman, who describes herself as "Saudi, genetically wahabi and a woman," and read the 20-plus comments to her post about "Burka Woman."
-------------------------------------------------------------
p.s. - Regarding the photo above, I consider it definitive proof that men in the Islamic world do indeed find women in Burkas sexually attractive. I took the photo in Riyadh, inside a barracks occupied by Saudi Ministry of Interior security forces. Some of the troops had taken photos of women from glossy magazines, cut out the (lavishly made-up) eyes, and taped them to the walls in their rooms. Not the rest of the women, just their eyes. Saudi pin-up girls.
Posted by TSB at 10:04 AM
Labels: Burka Woman