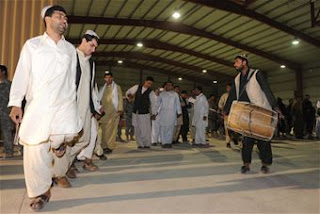 
Maybe I was too quick to dismiss the idea of folk dance as a tool of military psychological operations (see old school PSYOPS), because our coalition partners in Afghanistan have been accused of using just that to fight the Taliban.

Thanks to WikiLeaks, we know about certain comments made by former Australian Prime Minister Rudd:

Despite regular assurances from the Federal Government that gains are being made, it has been reported that secret US embassy cables show Australia has concerns about the nine-year war in which 21 Diggers have died.

It was reported Mr Rudd described the contribution of France and Germany to fighting the Taliban as "organising dance festivals" and confided that Afghanistan "scares the hell" out of him.

He says that France and Germany are running plays out of the U.S. Army's old PSYOPS manual? Well, I hope they are. It worked in Hostland, and it could be just the thing to make the Pashtun lighten up.

I say go for it. In the words of Otis B. Driftwood (Groucho Marx, in Night at the Opera): "Let joy be unconfined. Let there be dancing in the streets, drinking in the saloons and necking in the parlor."
Posted by TSB at 1:36 PM