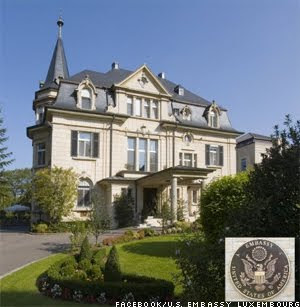 The photo is of the Ambassador's residence in Luxembourg, an obvious hovel, the discomforts of which played a major part in ex-Ambassador Cynthia Stroum's constant battles with her staff.

Of course, you've seen the scathing OIG report about our Ambassador/Queen Bee in Luxembourg, the political appointee who was such a disaster that FSOs on her staff curtailed their assignments to take jobs in Iraq and Afghanistan. (That's a feat kind of like reversing the course of nature, since cushy spots like Luxembourg are usually reserved for people coming out of those places.) If you haven't read that report, go here.

Now that you're read it, you might be idly curious about exactly how much money you would have to bundle into campaign cash for a chance to live in a residence so unsatisfactory. Open Secrets Blog (motto: investigating money in politics) has done the research for you:

A new report from the Office of the Inspector General at the U.S. Department of State slams the tenure of U.S. Ambassador to Luxembourg Cynthia Stroum, one of the top fund-raisers for President Barack Obama and a prolific Democratic donor. Obama appointed her to the post in 2009.

"Most employees describe the Ambassador as aggressive, bullying, hostile and intimidating, which has resulted in an extremely difficult, unhappy and uncertain work environment," the new report states (see a .pdf file of the 66-page report here).

Some staffers even requested transfers to U.S. embassies in Iraq and Afghanistan to get away from Stroum's "confrontational management style."

According to research by the Center for Responsive Politics, Stroum bundled at least $800,000 for Obama's committees, including a minimum of $500,000 to assist his 2008 presidential campaign and $300,000 to help pay for his inauguration in January 2009.

No other bundler-turned-ambassador has funneled more money Obama's way, the Center finds, although bundling disclosure practices paint only a partial picture.

Presidential candidates are not required to disclose their bundlers' names or the amounts bundled. The information that was voluntarily disclosed in 2008 was often only in broad ranges, such as "more than $500,000" -- the category used to describe Stroum's activities, as well as about four dozen other people's.

As OpenSecrets Blog reported at the time of her nomination, Stroum, along with her daughter, has also directly contributed about $165,000 to federal parties, candidates and committees since 1989.

Of this sum, 97 percent has gone to Democrats, including $4,600 to Obama and $1,000 to now-Secretary of State Hillary Clinton. Stroum also personally donated $10,000 to Obama's inauguration committee.

Here is a table of her other top beneficiaries:

How much does it cost to live like an Ambassador in Luxembourg, the Bahamas, or France? The answer is at least $800,000. At rates like that, I can understand why Cynthia Stroum wanted everything in her house exactly so.
Posted by TSB at 3:04 PM

But I betcha that when Straum gets inside the voting booth she becomes non-partisan, reflexively voting for the candidate she considers the most like her self... Assholes secretly cross party lines all the time to vote for assholes. It explains everything.
-Leningrad Cowboy "Lovetron"

I don't have any reason to think she's insincere about her partisan affiliation, however, there is certainly a level at which politics becomes just business, especially for major contributors like her and her late father (the person who made all that money she spends).

The more I see of politicians when they are out of the public view, the more examples I could cite of completely egregious asshole behavior, from people in both parties. "Kissing up and kicking down" as a friend of mine describes it.

I work in the rare book trade. Everybody in it is the kid you did not want to play with when you were little. Everybody in the trade identifies as Liberal Democrat. But it is the most illiberal, least democratic, most Trujillo-like trade group there is. When I announced my Assholes Vote for Assholes Theory at a Grollier Club dinner, noted for its rudeness to waiters, I caught people staring embarrassedly "down" into their expensive lip-smacking soup. I even saw some spoons move in the wrong direction. My wager, which you have sidestepped, stands.
-Leningrad Cowboy "Lovetron"

"Everybody in it is the kid you did not want to play with when you were little" LOL!!

Okay, I can believe that someone with Straum's rich-bitch background would see a personal affinity with someone similar to herself [fill in the name of any haughty elected official, whether he was born rich or got that way by, say, marrying rich widows] that trumps her political affiliation. Like votes for like.

I worked at the World Bank for a couple years, and I always noted that financial elitists seemed to be on exactly the same wavelength no matter what their political differences might be. I'm sure the waiters there could really tell some horror stories.

Being in the security field, I already know what horror stories the bodyguard details to our senior public officials can tell.

The MRLF Palin would have had an easier road to trademarking "Asshole" before Straum made the scene. It's now a race to see who will sign Asshole on the dotted line first. My guess is whoever does it guarantees themselves the complete Asshole Vote and biggest Asshole Donations in perpetuity.