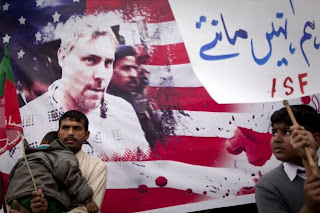 The senior anchor at DawnNews, a television station associated with Pakistan's most influential English language newspaper, described the damage the Davis case has done to the U.S. image there in an opinion piece at Dawn.com today. You don't have to agree with all of his premises to accept his main point, which is that our public diplomacy efforts in Pakistan are pretty much dead.

The time to evaluate the impact of this issue on the vital strategic relationship between the two countries will come later. But at least in one significant respect, Pakistan-US ties are already badly damaged. And this relates to the nature and direction of public discourse in Pakistan about the United States.

The Davis issue has disfigured the environment in which the strategic partnership with the US was being nurtured. Raymond Davis endorses the typical Pakistani image of the US as a trigger-happy bully. In popular perception, Davis is the personification of a policy conduct Washington has displayed all around since 9/11 at a much larger scale — from the sands of Iraq to the mountains of Afghanistan and in the Fata region.

This nationwide welling up of anti-US emotion pushes further down the already declining US ratings in Pakistan. This is major damage to the ‘hearts and minds’ outreach programme that Secretary of State Hillary Clinton has been spearheading to fashion a better image for her country in Pakistan.

The policy worked at three levels: promotion of goods and services that the US brings to Pakistan; dilution of criticism of Washington’s policies by a robust media policy of rebuttals, denials and counter-charges; and isolation of those organisations and individuals whose sense of reality did not conform to Washington’s interest in Pakistan.

Admittedly, this policy worked rather well. The voice of America in Pakistan got considerably amplified, thanks primarily, though not only, to well-planned vigorous pro-US media activity carried out by known native advocates of Washington’s interests.

To change negative publicity into a positive profile, Washington carried out vast and constant diplomatic engagement with the politicians and the military top brass alike. Statistics show that in the last year and a half, Pakistan has been the US officials’ most ‘visited’ country in the world.

How many hearts and minds exactly turned in Washington’s favour, we don’t know. Perhaps not many. But something did change. Thorny controversies that once defined public discourse on the US disappeared into thin air. Towards the end of 2010 and on the eve of 2011 not a whisper was heard about the presence of Blackwater in Pakistan, expansion of US embassy premises, unauthorised and suspicious movement of US diplomats and embassy personnel. Even the matter of granting visas to US officials became a non-issue. The Kerry Lugar Bill’s preconditions for getting aid were totally forgotten.

But then came Mr Davis with his Glock handgun taking Pakistani lives and shooting through the heart the hearts and minds campaign. Since then Washington’s public profile has been completely defiled.

The strategic communication regime Washington’s spin doctors had put in place to create an enabling environment for successful diplomacy — called propaganda in old times — is completely dysfunctional. The trust deficit in the realm of public diplomacy is as wide as never before.

This is long-term damage recovering from which would take much longer than settling the issue of diplomatic immunity.

We do not know what Davis’s real mission was, but he certainly performed one task of strategic scale: ruining whatever little hope public diplomacy campaigners might have had of convincing the simple folk of Pakistan that the US was just a friendly giant they had no reason to run away from.

Apparently most people are going with what is reported in media so far and not all facts are known to us. However, after reading various media sources ( to maintain objectivity ) from different countries here is what I have found out:

1-American media has reported “ABC news claims Raymond Davis runs Hyperion Protective Consultant­s, LLC, a company that provides "loss and risk management profession­als." If you checkout their web site it seem like a fly by night company that among other small bore services sells things like pepper spray. Sounds like a classic CIA "cutout"”

2- He was unable to provide any diplomatic credentials/documents when he was arrested by police.

3- Apparently he shot the guys from behind which means he could shot them in legs or something without having to kill them. So self defense claim will be hard to make for defense team. This also rest on whether or not those dead were carrying arms or not plus claim that same guys had looted another local at gun point earlier would have to be verified.

4- US consulate and embassy had been reluctant or atleast seem to be delaying to provide information on the people who ran over third Pakistani citizen and this delay or denial on their part in not making these guys look like good guys. What do they say... if it walks like a duck....yes so that is also something US embassy needs to come clean about and return the questionnaire sent to them by Punjab police.

5- Also, fact that Mr. Cameron called Mr. Nawaz Shariff who no matter what holds no government position makes me believe that US govt is well aware of what strings to pull and get what they want where as what they ought to be doing is follow the process and respect and comply with local law enforcement policies and procedures and let the justice be served. To claim higher moral grounds, you have to show it through your actions.

6- At last but not the least, sadly yet again I am not hopeful that our politicians will let the law take it course and at the end, some dirty deal will be made. I hope for once I will be proved wrong.
www.pakistanpostman.blogspot.com

Thanks very much for your comment. A lot of sometimes conflicting information has been reported, but I find that the Dawn media group seems the best informed, especially when it comes to information from Foreign Office sources.

He has a U.S. diplomatic passport and was issued a diplomatic visa by the Pakistani embassy in Washington. Dawn has even run a photo of that visa, which clearly shows the designation "CD" for Corps Diplomatique in the visa number.

Police are reported to have found that the two Davis shot were both armed, and they were hit in the front as well as in the back. Laws on self defense may differ, but I think the main issue is whether or not the two threatened Davis before he opened fire. The press has reported statements by witnesses who say they did. The Lahore police filed First Information Reports concerning multiple armed robberies that the two committed in the same area immediately before they encountered Davis, and reportedly the police recovered the cash and goods stolen in those robberies from the bodies of the two men. With all that information, it should be possible to verify the circumstances surrounding the shooting.

Regarding the third citizen who was killed in a vehicular accident, that's the biggest tragedy here. He was an innocent party, and an indirect victim of the armed assault that was committed on Davis. But there is no reason to impute a criminal motive to what was clearly an accident. Nations do indeed routinely respect diplomatic immunity in cases of fatal traffic accidents. I live and drive in a city that has thousands of diplomats in it, and I am aware that if one of them should kill a local citizen, even if he were at fault, even if he were driving while intoxicated, the diplomat would merely be sent home. I hate that practice as much as anybody else, but I realize that is the established practice that all nations follow.

It's a sad business all around, and I hope that it can be resolved before there is a rupture of relations between the U.S. and Pakistan.

I would like to highlight paragraph from Express tribune as under:
"In a letter to the federal government, the provincial authorities had recommended registration of an espionage case on the basis of a confessional statement of Davis that he had made during interrogation, the source added.
Police had recovered sensitive documents and photographs of Pakistan’s defence installations from Davis."

Under these circumstances don't you think that Mr Raymond Davis was innocent.

The only charges before Davis concern the shooting. Pakistani authorities weren't persuaded to charge him with anything else, so I assume there isn't any basis for an espionage charge.

I don't know what the sensistive documents and photos referred to consist of, but I suspect they amount to nothing. If the U.S. government wants photographs of a defense installation, it has many technical resources (satelites, etc.) for getting them. There is no need to send someone out with a handheld camera or cell phone.

Suppose Pakistan and the US know Davis is a CIA asset. Would the US
get heavy handed to avoid revealing
secrets?

Things are getting heavy alright, with U.S. - Pakistani relations close to breaking.

But the USG is upset for an obvious reason: one of its diplomatic staff is being held in violation of his diplomatic immunity under international law. I see no reason to look for ulterior motives.

Than what should be the case that, USG is trying to provide fake diplomatic visa and entry to raymon davis. Unplanned visit of Mr Lugar to Pakistan, aren't these be consider as pressure tactics....

I don't know what fake diplomatic visa you mean. Davis's visa was issued by the Pakistani embassy in Washington, and it is perfectly genuine. Dawn even published a photo of the visa, so you can see it for yourself: http://www.dawn.com/2011/01/31/arrested-us-national-does-not-have-diplomatic-visa-documents.html.

Notice the "CD" before the visa number; that indicates a Corps Diplomatique visa. That visa is identical to ones that I have been issued by the same Pakistani embassy.

As for Senator Kerry, it is his fifth visit in the last year, I believe. He has long been very actively involved with U.S.-Pakistani relations. I haven't heard him say anything threatening, and I don't think you should regard his visit as a threat, or as being mainly related to the Davis matter.

I am fore wording the caption written under the same Dawn News page you have refereed:
"No decision yet to hand over Davis to US: Babar
By Syed Irfan Raza | From the Newspaper
January 31, 2011 (3 weeks ago)

DawnNews has received exclusive documents that show that US national Raymond Davis, arrested for the Killing of two Pakistanis, does not have a diplomatic visa. -DawnNews

The photo itself refutes that caption. "CD" is the designator for diplomatic visas.

Whatever other facts may be in dispute, it is clear that Davis was admitted to Pakistan on a diplomatic passport for official purposes.