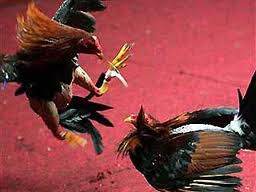 It was a rooster, actually. And the fight wasn't fair, since the rooster was armed with a knife when he killed Jose Luis Ochoa late last Thursday night during an altercation on the outskirts of Bakersfield, California. (To be precise, this mano-a-mano brawl happened "near in the intersection of Avenue 24 and Road 128, about three miles north of the Kern County line and west of Highway 99" according to Tulare County Sheriff deputies.) But, fair fight or not, you have to admit that's a remarkable bit of news.

Here's the report by a local Bakersfield news outlet, which I think is a superb example of crime reporting:

Cockfighting can be a fatal activity, not just for the roosters.

A 35-year-old Lamont man died Sunday after being stabbed in the leg by a sharp blade that was attached to a fighting bird, authorities said.

Jose Luis Ochoa was taken to Delano Regional Medical Center shortly after Tulare County sheriff's deputies were dispatched to a reported cockfight near in the intersection of Avenue 24 and Road 128, about three miles north of the Kern County line and west of Highway 99.

An autopsy Wednesday revealed that the accidental death was caused by an injury to Ochoa's right calf, according to a Kern County Sheriff's Department news release.

"I have never seen this type of incident," said Sgt. Martin King, a 24-year veteran who noted the major arteries that could have been severed. "People have been known to bleed out from those injuries if medical attention is not obtained immediately."

King said Ochoa and others fled when deputies arrived at the alleged cockfight, a gambling event in which birds armed with razor-like knives fight each other -- often to the death.

Deputies, who were tipped off by an anonymous caller Sunday, found five dead roosters and other evidence of cockfighting at the scene, King said. No arrests have been made and no citations have been written in connection to the incident.

Ochoa's death caught the attention of John Goodwin, director of animal cruelty policy for the Humane Society of the United States.

"It's pretty rare, but I'm surprised it doesn't happen more often considering the knives they put on those birds," he said. "It's not a surprise that somebody got killed."

The status of the crime in the state is surely related to its continued existence, Goodwin said. Cockfighting, raising gamecocks, being a spectator and possessing related tools are all misdemeanors in California, although a second cockfighting offense is a felony.

California is an "attractive destination" to people involved in cockfighting, Goodwin said, especially considering nearby states like Oregon, Arizona and New Mexico punish the crime as a felony.

"We have seen a steady stream of activity in states with weaker laws," Goodwin said.

In March 2008, local law enforcement officials broke up an illegal cockfighting operation in the 2700 block of Trust Avenue in east Bakersfield.

In November, five men were arrested after Kern County sheriff's deputies responded to a large cockfighting ring in the 200 block of East Curnow Road, south of Bakersfield. Three guns and hundreds of birds were found at the scene.

In addition, a man in India was killed last month when his fighting rooster slashed his throat, the London-based Daily Mail reported.

"This is a sport that is popular in other parts of the world, and they have brought that interest to Kern County," Public Health Director Matt Constantine said. "It's illegal and inhumane, but we have not seen a decline."

Ochoa, for one, had participated in cockfighting before Sunday. Last year he paid $370 in fines after pleading no contest to one count of owning or training an animal for fighting, according to Kern County Superior Court records.

In comparison, Goodwin said, a bettors' pot can reach $10,000 even in a relatively small cockfight.

"The money adds up fast, and that's why we need strong penalties," Goodwin said. "For a law to be a deterrent, the penalty has to be greater than the gain of breaking the law."

In most cases, the roosters suffer the worst injuries. They usually have been injected with antibiotics and steroids, Constantine said. The spurs on their legs and the combs on their heads are often cut off. Rehabilitation is "a real challenge," he said.

It behooves law enforcement agencies to continue cracking down on cockfighting because there are often other crimes involved, Goodwin said.

"The people who do this don't wake up in the morning and say, 'I'm gonna be a good, law-abiding citizen,'" he said.

I am far more educated about cockfighting now than I was before reading that.

By the way, here's the story about that Indian rooster who broke bad last month, in which the reporter even ascribes a motive to the rooster's assault:

A cockfighting rooster appears to have taken deadly revenge on its trainer for forcing it back into the ring too soon.

The bird is said to have attacked owner Singrai Soren and slit his throat with razor blades he had attached to its legs.

Villagers in Mohanpur, West Bengal, were warned not to approach what police described as ‘an unknown rooster with black and red feathers’.

The Indian police issued an all-points bulletin for a rooster who was known to be armed and dangerous? That makes me curious. Given the great Hindu reverence for all forms of life, how do the police take down a man-killing bird nonviolently? With a stun gun? Tranquilizer dart? Maybe they lure it into a cage with a trail of bread crumbs?

Come to think of it, the article doesn't say whether the law ever caught up with the fugitive fowl. I'm kind of sympathetic with his motive, so I'd like to think that he's still on the lam, lying low in some farm or field while he plots his escape across the border to Pakistan. Kind of like Steve McQueen in The Getaway.
Posted by TSB at 5:24 PM

... and suddenly I'm seeing that Heifer International operation in a whole new light. I donated $20 to send a flock of chicks somewhere in kindness. Color me naive.

Can we carpetbomb Afghanistan with poultry now?

That might be a good idea. Evidently chickens are a lot more bad-ass than I would have thought, at least when they have blades tied to their legs. Imagine what they could do if they had opposable thumbs?

I've written a novel all about giant battle cocks killing cock fighters and those who are cruel to animals! It's called 'Battle Cocks' by Ross Brodie.

When I was at the University of Southwest Louisiana there was a cockfighting club near New Iberia for dilettantes. You bought a chicken at the door, rented some spurs and knives, and sent it in for a certain loss against a veteran chicken like the pro from Bakersfield. The cockpit acted as a training camp for the for the pros, so there wasn't much gambling. Part of the fun was you had to name your chicken so the announcer could do a proper introduction. Knowing it would lose, I always named mine for somebody I despised, usually my American Literature manager at the rare book company. Many of the African American patrons named their preliminary match chickens for David Duke; some took the tack of nom de sellouts. I must have seen Wayne Brady, Condoleeza, and Morgan Freeman tapped out dozens of times.
--Lenigrad Cowboy "Lovetron"

Louisianna? Evidently cockfighting is a lot more common (and tolerated) than I thought it was.

A long time ago I poked my head into a cockfighting ring in Puerto Rico (where I was stationed in the Army) and I thought it was like a glimpse back into some long-ago Spanish colonial low-rent substitute for bull fighting. I never suspected it was at all common in the USA.

Be sure to take in the slide show of a night at the Li'l Rebel Game Club, considered a more effete operation than the upscale Atchafalaya Game Club arena where I watched REDACTED, the American Lit manager where I work, die as a chicken twenty times(It's not really fair for the New York Times to call a quarter million dollar corrugated metal showplace an old potato shed.)Cockfighting has been illegal in Louisiana since 2008; Governor Edwards got out of Federal prison last month.
-Leningrad Cowboy "Lovetron"