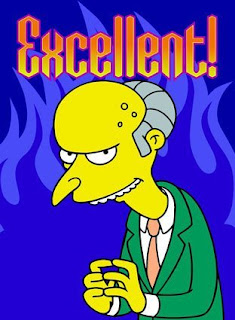 Now we have them just where we want them. The City of Baghdad has sued the U.S. military in a local court seeking damages:

The Baghdad city government is demanding the United States pay $1 billion and apologize for damage to the city caused by blast walls erected during the nearly eight-year long war.

City officials filed a lawsuit in an Iraqi court against the U.S. military, a media official said Thursday. He did not want to be identified due to the sensitivity of the situation.

In an official statement posted late Wednesday on its website, the local government said U.S. forces had marred the "beautiful city."

Blast walls "put up at the pretext of security" damaged the sewage system and sidewalks, caused traffic jams and paralyzed business, the statement read.

Perfect! Now we can counter-sue the city for the damages to our people and property that were caused by all the rockets and car bombs that the city government has failed to prevent.

If there is one arena of conflict in which the United States dominates, it's the legal one. We might not be able to put down a political-military opponent like Muqtada al-Sadr, but we have lawyers who will attack a plaintiff like a pack of hungry jackals and not leave a scrape of meat on his bones.

I checked the Baghdad municipal government website to look for an original text of the press release, but they don't have an English language side. (Foreigners!) So a somewhat disjointed Google translation will have to do:

Baghdad Municipality demands the U.S. side to pay damages estimated at one billion dollars were siphoned the damage caused to the forces of the damaged infrastructure of the capital and to apologize to the people of Baghdad

Baghdad Municipality has decided to demand the U.S. side to pay damages estimated at one billion dollars due to mistakes of the U.S. military with regard to the secretariat of Baghdad, to observe the work and plans implemented by the Secretariat in the sprawling city such as Baghdad.

And those familiar with the scenes of this work will find himself the size of the harm caused to Baghdad when U.S. forces to turn this beautiful city to the camp and randomly destructive reflected overlook the deliberate and underestimated the simplest forms and formats of public taste in the capital of the country grew up on the Dvavi two rivers the first human civilizations.

He insisted the Americans at that time to work individually, ignoring the dozens of calls from the Secretariat worked to disrupt Baghdad, which resulted in the destruction of thousands of kilometers from the streets, without referring to the specialized expertise which the Municipality of Baghdad.

Have led these barriers that were created under the pretext of security and requirements to the destruction of sewers, pavements, and water and green space, agriculture, and mechanisms of irrigation, which has cost the Iraqi state huge amounts of money as well as the great suffering of the citizen-Baghdadi reason and endorsements in Baghdad from Zhamat traffic and access to a state similar to disability or paralysis in the work of citizens and police and hygiene and even the owners of unskilled occupations.

Despite all what has lifted from those barriers deaf after the success of our security forces to improve the level of security, the proportion of Marf them for no more than (5%) note that the lifting operations and the reform of Madmrth those barriers of sidewalks and paving, and water networks and sewer systems and intentional destruction of fences on the streets and highways and repeatedly as well as the destruction of long paths and palm trees from the roads, which cost the Municipality of Baghdad is the other huge amounts of money could be spent on basic services for the beloved people of Baghdad.

Hence, in view of the serious damage and the size of the consequent losses are no longer able to Baghdad Municipality incurred we are about what we're seeing is the responsibility of national, functional and far from the courtesies of political and out of keenness to inform public opinion by, we call on the U.S. side to apologize to the people of Baghdad and the payment of these expenses, which their technical authorities in the Secretariat of one billion dollars, especially that in front of the Municipality of Baghdad strategic projects should be completed as well as other projects were deprived Baghdadis and all Iraqis for decades despite the fact that the Secretariat has been able to implement many of the major projects that will touch Baghdadis soon, especially as we see Iraqna day, witness renaissance of democracy, it is also witness the renaissance of development towards more construction and progress.

I say, millions for blast walls but not one cent for damages!
Posted by TSB at 10:34 AM

The US Military is now adept at assessing damage and paying damages. I wouldn't be surprised if the US is assisting the city with its claim.

In that case, I have a suggestion for the new Congress about where they can make further cuts in the 2011 budget.

TSB: I think I found a reason for the suit! Can you believe large sums of money disappearing in Iraq?
(Don't worry though.. the government says it must be around somewhere!!)
BAGHDAD (Agencies)
Around $40 billion are "missing" from a post-Gulf War fund that Iraq maintains to protect the money from foreign claims, its parliamentary speaker said on Monday as authorities scrambled to head off further protests on cutting politicians' pay and ramping up support for the needy

"There is missing money, we do not know where it has gone," Osama al-Nujaifi said at a news conference in Baghdad. "The money is around $40 billion in total."

Billion with a "B"? The finder's fee for that much missing money would be sweet!