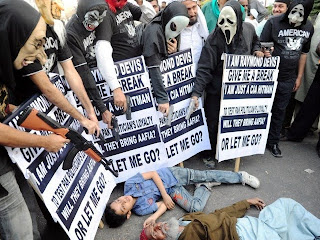 A couple quick comments on the situation surrounding Raymond Davis, the U.S. Embassy TDYer in Lahore who shot two Pakistanis in an apparent act of self defense.

First, Mr. Davis appeared in court for a second time today, where the judge ordered him to remain in custody for another eight days while police continue to investigate the case against him. No doubt the police also hope to identify the consulate employees who were trying to extricate Davis from the aftermath of his shooting when one of their vehicles fatally struck a third Pakistani. Davis reportedly is not cooperating with them on that.

Second, Pakistani public anger about this case is building. NPR had a good story about that today. Read it here or listen to it here:

The case of Davis has gripped Pakistan's headlines and spilled into the streets in a show of anti-Americanism.

"Oppressor, give us an answer!" the demonstrators cried. "Account for the blood you shed."

Hundreds of protesters gathered at the spot where Davis allegedly shot dead two Pakistanis, who he said were armed robbers. The small gathering, which included many students, took up an ominous chant aimed at Davis, whose drama one newspaper called "an avatar of the Ugly American."

Davis has been depicted in banners across town as a bloodthirsty "terrorist."

There is talk of "revenge" for the fatal shooting of the two men and the death of a third man who was struck by an SUV reportedly coming to Davis' rescue.

Rashed Rahman, editor of the Daily Times, says the hostility erupting over the case of the jailed American is an extension of the furor over the blasphemy debate where, in defense of Islam, the country's radical right has whipped an anti-Western fervor. His paper was owned by Salman Taseer, the late Punjab governor who was killed by his bodyguard because he sought to reform the country's blasphemy laws.

"An issue like this is just going to add more ammunition to that anti-American sentiment; and Mr. Davis has provided a most wonderful opportunity to raise the bar even higher and I think the mood on the street is something that needs to be watched," Rahman says. "I'm not saying it's Egypt or Tunisia, but I'm just saying the street, at least the religious right, could explode."

The release of Davis could indeed provide a focal point for all the free-floating anger that seethes through Pakistan for a hundred different reasons.

Rightly or wrongly, legally or illegally, it looks like the Pakistani authorities will let this situation play out for a while longer.
Posted by TSB at 7:39 PM
Labels: Raymond Davis