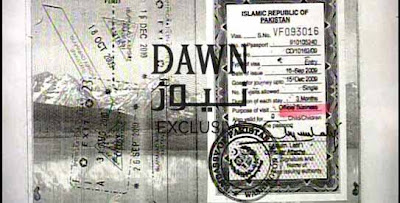 It's not as if there aren't other things going on in the world - as I type this it is being reported that Hosni Mubarak has resigned as head of the ruling party in Egypt - but the case of Raymond Davis is just so interesting. So here's one more bit of news to add to that already compiled by Diplopundit.

Dawn, which is Pakistan's oldest English-language newspaper and the Pakistani counterpart to the WaPo in that it is the first choice for officials who wish to leak info or launch trial balloons, has some non-attributable quotes today about the Pakistani Foreign Office's position on the matter of Davis's diplomatic immunity.

Dawn had earlier run the above photo of the visa that was placed in Davis's passport by the Pakistani embassy in Washington in December of 2009, and which was later extended several times by the Foreign Office in Islamabad. Note that the purpose of the visit is listed as "Official Business" and the visa number is preceded by "CD" for Corps Diplomatique. So far, so good.

But did the U.S. Embassy in Islamabad register Davis with the Foreign Office as a member of its technical and administrative staff? The answer is a big MAYBE.

According to Dawn's unnamed senior officials, the embassy notified the FO in January of 2010 that Davis was a member of its technical and administrative staff, and the FO "did not issue a disagreement note." They did not reply at all, and that left the embassy with an expectation that Davis was registered with the FO when, in fact, he may not have been.

Here are the key parts of the story (Experts start consultations on status of Davis):

“The Foreign Office’s legal division and the government’s law and justice division have started consultations on the matter,” a senior official disclosed to Dawn a day after the US embassy through a diplomatic note urged the Pakistan government to issue a certificate on the status of Raymond Davis.

According to Pakistan’s Diplomatic and Consular Privileges Act of 1972, the government, in case of a dispute over privileges and immunities of someone working for a foreign mission, has to issue a certification which will be deemed as “conclusive evidence of that fact”.

A few slip-ups by Pakistani officials while dealing with Davis’ notification and subsequent registration request are quite obvious. His posting in Pakistan was notified in January last year. However, the FO did not issue a disagreement note, rather there was apparently no reply. The US embassy is now claiming Davis’s immunity on the basis of that notification.

However, when the embassy submitted his registration request queries cropped up and these were communicated to it, which remained unresolved to date. Resultantly, Davis hasn’t been registered as yet.

But the US embassy maintained that the FO registration was irrelevant for the immunities guaranteed under the Vienna Convention. Moreover, the Pakistani officials agreed that they took too long to decide on Davis’ registration case.

There are also problems on the American side. The US had filed two applications for Davis’s registration — one for the Lahore Consulate and the other for the Islamabad Embassy. Which one of these requests ultimately holds would determine which Vienna Convention — the one on diplomatic relations (1961) or that on consular relations (1963) — would apply to Davis if he were to be ultimately granted immunity.

But the decisive factor in the case, even if the Pakistan government agrees to give limited immunity, would be a determination of the fact whether the act of fatally shooting the two alleged muggers occurred during the course of his duties.

At least for now no one is ready to speak on what Davis was doing in Mozang, Lahore, which has no diplomatic activity whatsoever.

The Vienna Convention’s Article 37 states: “…. the immunity from civil and administrative jurisdiction of the receiving State specified in paragraph 1 of article 31 shall not extend to acts performed outside the course of their duties.”

An official privy to some initial legal consultations said Davis by no stretch of imagination qualified for full immunity.

The US embassy is, however, adamant that Davis is entitled to full criminal immunity and cannot be lawfully arrested or detained.

Can a nation unilaterally declare an employee to be a member of its diplomatic staff despite the absence of agreement by the receiving nation?
Posted by TSB at 7:44 AM
Labels: Raymond Davis

If the FO "did not issue a disagreement note," doesn't that mean tacit agreement? It seems like a shaky argument, but may be the only one.

I hope Davis is getting lots of visits from ConOffs to double check on mistreatment - it's not a great sign when you have to take weapons away from the guards to prevent "retaliation."

It's a weird situation when an embassy and its host country foreign ministry have a disagreement about whether or not a particular employee is on the diplomatic list. I think the deciding vote must go to the foreign ministry.

I'm constrained by "matters of official concern that are not referenced from a publicly available source of information" here, but it doesn't appear that Davis is being mistreated by Punjabi police (other than by virtue of them holding him against our embassy's assertion of immunity). I take it as a good sign that they are keeping his location secret, and that they held his most recent court appearance before official court hours in order to avoid crowds, and also that they have put out so much information to the press that substantiates his self-defense claim. I'm not 100% sure about that report of police guards being disarmed, but some precautions like that make sense, especially after the assassination of the Governor of Punjab Province last month by one of his police guards.

That country is such a tinderbox, that I have to suspect that both the host government and the Department would be relieved if Davis is not released for a while yet. That's saying the heretical, but so be it.

Can a nation unilaterally declare an employee to be a member of its diplomatic staff despite the absence of agreement by the receiving nation?

Can they? Depends on how many divisions they have under arms and if they are willing to use them.

If he has a diplomatic passport then he has immunity.

It's much more complicated than what kind of passport he has. I have a diplomatic passport, but I don't have immunity when I travel to a foreign country. Only those persons an embassy notifies to a host country as diplomatic, consular, or administrative and technical staff, and the eligible family members of those persons, have immunity. And not always full immunity, and not always immunity against civil suits. And immunity never applies to those persons if they are citizens of the host nation. And a host nation may object to a notification, or revoke a person's diplomatic status. Or the sending nation may withdraw its claim to immunity. The sending nation may opt to try one of its diplomats at home for an offense he committed abroad. And so on.

It's a complicated matter, and there will more likely be a political resolution than a legal-diplomatic one.

Now Sire , Davis could have been the Lord Viceroy to Pakistan for Pax Americana , but thats a moot point. What was he doing in an old crowded part of town ( the kind that get bombed in paksitan all the time..it is plausible he was purchasing glass bangles for his wife ) least likely though since he's been in an out of Pakistan several times before. What was he doing carrying firearms, satellite phones and had been in contact with Jamat-ud-dawa ( woohoo thats Al-Qaeda affilite for you good ol chap) for quite some time now. US said he was in a mission to ensnare the "evil doer" ? really ?? Try imagining that conversation with the Al_qaeda affiliate bearded goon ..." uum Mr. Moolah Pres. Obama demands you stop doing that **** now ? " ....really ?? The US press said Davis was a CIA smooth operator spy who spoke local dialects etc ...wrong !! You should see his casual interview with the Lahore police ....if he spoke Urdu or Punjabi then he should have used it there but didnt simply because he was NOT the usual humint asset ...you can review what was done wrong at the diplomatic paperwork level ...but if you ever think why a US contractor was in talks with Al-qaeda affiliate and why Pakistan gets bombed almost every other day while your Presidents declare to the nation of how the war on Terror and Al_qaeda is being won ...I think you bigger issues than thinking about the paper work in Islamabad. Jolly good ...carry on good ol chap !

I completely agree that there are bigger issues here than paperwork.