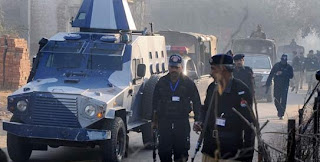 A heavy police deployment guarded the court premises as Raymond Davis was presented in court. –Photo by AP

Yesterday, on the day Davis's remand to police custody for investigation of the charges against him expired, the Lahore High Court placed him on a 14-day judicial remand. Presumably, the next step after judicial remand is to bring him to trial, unless the Pakistani federal government finds that he has diplomatic immunity.

“He has been remanded in judicial custody for 14 days. The next hearing will be on February 25,” Punjab government prosecutor Abdul Samad told reporters.

“He is being sent to central jail Kot Lakhpat,” said police official Suhail Sukhera in reference to the high-security prison in the eastern city of Lahore, where the US official confessed to shooting two men in self-defence last month.

Punjab Prosecutor Abdus Samad says the judge also has ordered that the Pakistani government clarify whether or not the man enjoys diplomatic immunity, as the US says he does, AFP reports.

The US says the American, identified by Pakistanis as Raymond Davis, shot two Pakistanis dead in late January in self-defense because they were trying to rob him.

The U.S. Consul General in Lahore, Carmela Conroy, responded with this statement:

Today, American diplomat Raymond Davis was remanded into judicial detention in Lahore in connection with an incident in this city on January 27.

We understand that eyewitnesses at the scene said that Ray acted in self defense when confronted with two armed men on a motorcycle. We also understand that these men were found with stolen property and, as the police stated today, a loaded gun. We regret that authorities did not consider these eyewitness accounts and physical evidence when they stated that this was not a case of self-defense.

As a member of the Administrative and Technical staff at the U.S. Embassy in Islamabad, Raymond Davis is entitled to full immunity from criminal prosecution by Pakistan under the Vienna Convention on Diplomatic Relations of 1961. All countries, including my country and your country, freely agreed to abide by these rules. Under the rules, he should be freed immediately.

We respect the law and Pakistan's sovereignty, and expect all representatives of our government to respect the laws of our host nation. We respect the people of Pakistan and enjoy working and living in this country. Americans and Pakistanis can accomplish so much together. We need to resolve this case immediately and continue our work, including cooperation in education and health, our common fight against extremist violence, and building bridges between the people of Pakistan and America.

This incident was a tragedy, and we feel tremendous sorrow over the loss of life. We extend our deep sympathy to all the family members who have been affected.

I take it as a bad sign that Davis has now been placed in jail, whereas until yesterday he had been held much more safely and discretely in an office at a police training center.

But at least we now have a statement of regret from a U.S. official - we feel tremendous sorrow over the loss of life - and that small gesture, however belated, might actually have some calming effect on the Pakistanis who control Davis's fate.

Update. A few minutes after I posted this I saw the following press release from the State Department spokesman:

In light of the political changes in Pakistan and after discussions with Afghan and Pakistani officials in Washington, it was agreed to postpone the Trilateral Meeting scheduled for February 23-24. We remain committed to robust engagement between Afghanistan, Pakistan, and the United States, as we share many issues of mutual concern and benefit from being at the same table. We look forward to convening a very productive Trilateral Meeting at the earliest opportunity.

I had discounted the vague murmurs about U.S. retaliation that appeared in the press over the last couple days, but evidently they were true. We are making the Davis case a major diplomatic incident.
Posted by TSB at 9:32 AM
Labels: Raymond Davis, U.S. Consulate Lahore